Greek death metallers Abyssus return with a  new EP entitled, ‘Unleash The Storm’, which is set to be released on March, 2018 via Mexican Death In Pieces and includes two brand new songs (Operation Ranch Hand and Unleash The Storm) and three cover songs from Bathory, Venom and Manilla Road. The cover artwork was curated by MFA Xii that the band has worked with again in the past. The album was recorded at Ignite Studio and mixing and mastering at Unreal Studios. 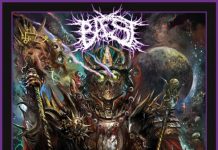