Abyssus are back and are back for good. The group, that really loves releasing Eps and splits (9 including ‘Unleash The Storm’, since 2012), has a new, killer ‘Ep, that contains a brand new song, ‘Operation Ranch Hand’, a re-recording of ‘Unleash The Storm’ and three cover songs on Bathory’s ‘The Rite of Darkness’, Venom’s ‘Warhead’ and Manilla Road’s ‘Open the Gates’. Their choice on these covers reveals their roots, and they deliver them with devotion, but with their personal stigma and personality being present. I’ve recently watched them play ‘Warhead’ in a gig and they have perfectly assimilated it. Generally speaking, the Celtic Frost/Obituary approach in Abyssus’ sound, atmosphere and in Analytis’ vocal delivery, has brought all three covers in the same level that coincides with Abyssus’ formula of songwritting.

‘Operation Ranch Hand’, with its well-known intro, taken from the Apocalypse Now movie, is a true death metal triumph, a song that is always in my player. Lyrically, it talks about the operation of the American army, that lasted about 9 years, in the south part of Vietnam. An operation that spreaded millions of toxic materials and ‘promoted’ cancer… With Bolt Thrower elements and with an energetic tempo/rhythm, it is, in my humble opinion, one of the best death metal songs for 2018. The title track, ‘Unleash The Storm’, is a re-recording of an older song, that we’ve firstly met in their ‘No Life In The Coffin’ split ‘Ep with Nocturnal Vomit. ‘Unleash The Storm’ reeks of Florida, Asphyx, Benediction, Bolt Thrower, Autopsy. The amazing cover artwork puts the pieces together for this interesting and entertaining release that really gets your money’s worth! 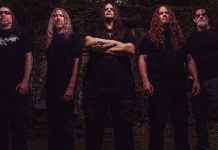