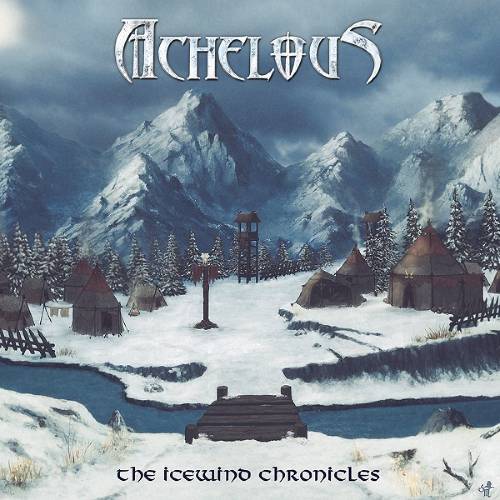 It was a couple of years ago when I first heard about Achelous and I went with my wife to watch them play live in a city nearby the town I live. We were sitting in a black leather couch (!), there were 3 or 4 fellas gossiping about everything except Achelous, a 55 to 60 years old man that had nothing to do with metal, he just saw the lights and came in to have a drink, trying to make a contact with a 25 years old hotty and 20-30 aficionados (most of them following the band from Athens) that were shouting, drinking, singing and headbanging like there’s no tomorrow, living the moment and appreciating 1000% of what Achelous had to offer them. During the show in which the band was almost perfect I was thinking that if these guys can play so great in such a weird place they can be great everywhere! And in studio is one of these “places”.

“The Icewind Chronicles”, presented by also Greek label No Remorse Records, is the sophomore full-length album of Achelous. Their story starts more than a decade ago. After its formation as a one-man project by Chris Achelous in Athens / Greece in January 2011 and two demos of atmospheric extreme sounds, it took them almost 2 years to evolve into something different. It was the November of 2013 when ex-Reflection singer Chris Kappas joined and it was then that they actually became a band. In April of 2014 they released a demo, “Al Iskandar”, and all 500 copies were sold in a short period. At the end of 2014 the band entered The Music House Studio in order to record their first EP entitled “The Cold Winds Of Olympus”. It was released in February 2015 and got very positive reviews. In 2018 the group finished the recordings of their debut full-length album, “Macedon”, which was released in September of 2018 and was highly acclaimed by fans and music Press. 2021’s EP “Northern Winds” was a first sample of what would follow, since the same-titled track is also included on the new album.

“The Icewind Chronicles” is probably the most epic album you will hear this year. And hear my saying, an album in which history will place it next to 1993’s ‘Kingdom of the Kings’ by Crush. Did I just called it legendary? Yes I did…! I know that their songs probably ring many bells and play the strong of nostalgia to my mind as their references response to my discotheque and some of my music memories. But I’ll be honest, i don’t know these guys, there are not my friends and I don’t try to make public relations. I’ll buy their album as most of you (must) will do. So my sayings are 100% honest and from straight from my heart.

If I must write down their influences I have to mention Bathory, Battleroar, Doomsword in some melancholic moments and Ironsword. Epic atmosphere, straight-forward Heavy/Power at its best, melodic passages, aggressive riffs, strong structure, deep emotional feeling and lyrics that are based on R.A. Salvatore’s Icewind Dale trilogy (fantasy novels based on the pen and paper RPG Dungeons and Dragons). Brilliant!

“The Icewind Chronicles” features guest appearances of Christina Petrogianni (vocals) in a symphonic flirt with an excellent result in two tracks, Johnny Litinakis (bass) and Haris Dinos (guitars) and was recorded, mixed and mastered at The Music House, Athens, Greece by Stathis Pavlantis (Reflection).