In the vast underground classic metal scene of the last years Air Raid made a good impression from the very beginning. It was bands like them and a few others that kept the integrity of the scene in high level. A scene that began to sink under the weight of all the mediocrity it contained.

‘Point Of Impact’ the band’s third release continues in the direction set from day one which is burning metal as defined by the old metal gods. The only thing I was concerned about the new album was the vocalist replacement. Being a fan since the ‘Danger Ahead’ EP I kind of connected the vocals of Michael Rinakakis to their music and I wasn’t very optimistic about the vocal outcome of the new one. In my opinion the vocal characteristics of Michael are very rare in this kind of music and maybe that was the basic ingredient that separated Air Raid from the rest. But, as it seems the new singer Arthur W Andersson fits perfectly in the place of the frontman of the band. He really is a great singer with the ability to hit very high notes without losing in expressiveness. The rest of the band remains in the same high standards we know. With Judas Priest being their initial influence, the band has eventually created a trademark sound of their own.

The album itself is pure heavy metal dynamite. No fillers, no ballads, just 8 songs of head banging, air guitaring, beer drinking old-school metal. In terms of songwriting it’s obvious that the band has turned into a well-oiled machine producing high quality heavy metal. From the dynamic opener‘Bound to destroy’ to the magnificent from all aspects, hymn ‘Victim of the night’ and from the great ‘Flying Fortress’ instrumental (the melodies of which reminded me of Dark Forest) to the flawless ‘The fire within’ and ‘We got The Force’ the listener is overwhelmed from tens of heavy riffs, inspired melodies, great choruses and thundering solos. The only objection I have is the awful artwork….I can’t believe that they couldn’t come up with anything else than this terrible drawing. At least they compensate us with one of the best releases in heavy metal for 2014.

The Swedes have done it again. Air Raid has become a guarantee for quality heavy metal. The only thing that remains now is for them to release a true masterpiece. Having in mind the work the band has done to this day, I believe we aren’t too far from seeing that happening. 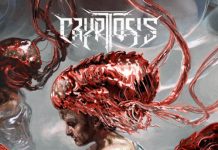