In 2016, the American Doomsters Alaric released their most recent record to this date via Neurot Recordings. One may think that it’s probably too late to write an article or a review about it; well I don’t give a damn, dude. “End of Mirrors” maybe the band’s best release (perhaps until the next one) and comes with a unique epic moos, with atmospheric elements piercing the veils of generic monolithic approaches, thus dilating the genre’s horizon (both for us and in general). There times when Alaric engulf us with a melancholic ‘sheet’, however rays of hope burst here and there, saving us from a most certain tantrum. The seven tracks of the album run long time and serve as chapters of a book.

The most essential features of “End of Mirrors” include Rick Jacobs’ work on the bass, filling up the compositions, while at the same time managing to add some groove, which actually fits in quite well. In the case of drums, Jason Willer relies on stable motifs without much complicated or even useless pummeling, while giving a touch of tribal aesthetics, which in turn add a primitive essence to the album. The unstoppable guitarist Russ Kent creates a kind of synaesthesia with his guitar parts, proven by the fact that after many hearings on the album you understand that the compositions he offers are not single-layered but multidimensional. In moments they can become “claustrophobic” and even “difficult” to bear if you are in the mood. As far as vocals are concerned, they have a special mix and combined with the mostly introverted lyrical themes, lead you to a personal emotional journey. Above I mentioned that Alaric offer some atmospheric moments as well, which has been mainly taken care of by Thomas Dimusio with electronically repeating drone patterns from analog synthesizers.

As far as production goes, one extra point is added to the whole sum because of the clarity and the creation of space in each instrument allowing them to breathe and unfold as they should. The recording and mixing were done by Skot Brown (Kempton House Studios), while the mastering was handled by Brad Boatright (Audiosiege).

It is recommended for fans who like to bland Type O Negative, Joy Division, and Candlemass with Christian Death. Highlight: “Wreckage”. 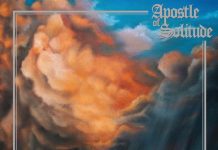 Apostle of Solitude: new album “Until The Darkness Goes”, this November via Cruz Del Sur Music 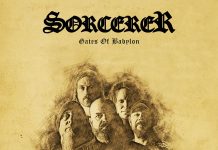