If someone asked me to guess the name of one band that would be reactivated in 2016, Antaeus would probably never had been among my conjectures. A band that stigmatised the ’00s underground, with a totally cult and somewhat anti-communicative profile, they never officialy disbanded, yet, after 2006’s “Blood Libelis” they seemed to fall in a kind of hiatus, most of their creative energy being channeled to Aosoth. Still, sans fanfare, Antaeus return this year with their fourth full-length album, “Condemnation”, under the black aegis of NoEvDia, with a cover art that closely follows the black-red pattern of the past.

It was more or less expected that the album would be blistering; and so it is. Antaeus were always the black litter of Von and early Beherit, which bands they filtered through a blacker and slightly more elegant and structured Scandinavian influence. Here be carnage; delivered by an ultrarapid guitar grating devoted to repetitive frenzy, by a more than satisfying drumming (slightly pushed forward in the production mixing), and a furious MkM performance. The album’s impetuosity is such that it easily seduces you to a psychotic descent towards the delights of cruelty. The furiously fast moments are top-notch, reaffirming the French’s qualitative status – even though the compositional diversity is somewhat scarce and some of the track parts are not that different. The album is a manual depicting extreme black metal – without escaping towards the noise brutality of the Revenge kind. Antaeus stay within the black metal landscape, despite their extremity, has indeed always been a feature of the band – listen for example to the basic riff of “Flesh Ritual”.

“Condemnation” is the comeback that we would have expected if we had anticipated a reanimation of Antaeus. It maybe too close to what we expected, the French may well have pulled it off quite safely, they were perhaps never interested in diversity. The thing is, that listening to this album, one thinks that the band had pressed “Pause” for ten years, and as soon as “Continue” was triggered they kept playing like no time passed – with just a slightly more robust production. The album is not innovative, the tracks may have similarities, yet “Condemnation” forces you to furiously hold invisible oranges throughout its duration – thus fulfilling excellently its unholy role. 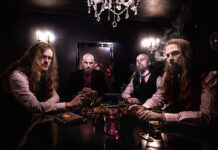