Hello, hello! First of all, congrats for this great release! Aptitude for Elimination is truly full of hate. We in Metal Invader have rated it with 4.5/6 skulls and we got really excited about it. Are you satisfied with the final outcome?

IronBeast – Thanks for your kind words! Indeed, we were furious as we had a concentrated rage of 5+ years… the time that passed since our previous release. We are glad that many people found this transformation of rage into music of their liking. As far as the final result is concerned, I am totally satisfied!

Alex – Thanks a lot, we appreciate it. Yeah, we’re psyched about it, there’s this aggressive vibe coming out listening to the tracks and we feel that’s what thrash is about. We like the fact that the songs are significantly faster than our debut album, we dig the sound more, we’re happy with the artwork and mostly we really like jamming them. Of course we’d like a few more hours in the studio to polish out some details, but you know, that way a release could be postponed for like forever.

What is the feedback you received so far?

IronBeast – So far, the feedback is very positive and is coming not only from local thrashers, but also –and mainly- from people and distros from around the world. From the very first days of the CD release people have showed their support towards both the band and the album.

Alex – The reviews we had are definitely positive and its encouraging to see the metal community embracing this album. But the most reaffirming thing about Aptitude is that the diehard thrashers seem to enjoy it and they honor us with impulsive violent moshes and stage-diving. So I guess.. So far, so good… (something missing here?).

Apart from the fact that the album lasts only 34 minutes (10 songs) which is quite aggressive on its own, the song titles are also very angry (Forced to Οbey, Beyond Redemption, Merchants of Hope…). In general terms, the album kicks serious ass both musically and lyrically. How did it end up to be so pumped up and fierce?

IronBeast – The album, as I was saying in the beginning, came out to be so aggressive and masculine because it reveals exactly our attitude. We are fed up and sick of seeing military pigs and cops trampling on human rights and freedoms (Forced To Obey), priesthoods and religious ambassadors acting violently on the hopes of ordinary people under the tolerance of “charitable” governments (Merchants Of Hope), societies that consider as losers those who do not conform to their requirements (Beyond Redemption / Aptitude For Elimination), and thrash fellows being more managers than metalheads, hunting their vanity rather than being modest lovers of the extreme sound, being transformed from original pure thrashers to ass-suckers (Soldier Of The Underground / Fashion Victim). I am sorry for this outburst, but…

Alex – I think its an alright length for a thrash record hahaha. You know, writing the songs came really natural to us, it was nothing too premeditated. A riff here and there, something we jammed in the studio, something that got stuck in our head, etc. George E. and I, usually don’t linger over an idea or a riff that we don’t immediately fancy. If it takes too much work to transform an idea into a song, we usually don’t do it. So what you have is this in your face stuff and maybe that’s why its more direct to the listener. That goes for the lyrics as well, if something has pissed us off like the army (Forced to Obey), like deception (Merchants of Hope), like fucking posers (Fashion Victim), like ourselves fucking up over and over again (Beyond Redemption), it’s not that hard writing about, it’s just us expressing ourselves.

From 2009, when Τhrash Brigade (their debut) was out, until now 5 years have passed. Why did it take you all this time to release a second album? What have you been doing? (I remember from a previous interview that some of you had to serve time in the army -which is still obligatory in Greece-)

Alex – You know what? During this time we recorded a few tracks to be released as a split but it never happened, I really don’t know what went wrong, I guess someone didn’t want their picture next to our mugs. The army was definitely a problem back then, we had the record out and we couldn’t appear live for like a year. Apart from that, we like going to the studio when we’re sure that there’s something worth recording and when we’re ready to play. I mean, I would hate people using the phrases “promising/it can only get better” and shit like that. It’s either good or bad. “Aptitude for elimination” was ready since 2012 but we had to fit into different time-schedules (army included), we’ve also had a lineup change during that period and we had to re-record some stuff, so it really got delayed.

Tell me about your line-up changes… How come and J. from Ravencult (drums) joined you?

IronBeast – We had quite a few changes in our line-up. Other than George, Alex and me who are the founding members, we changed a couple of bass players as well as drummers. Some of them flew away from the band due to immigration reasons, others due to limited time and others due to lack of balls to support our music and mentality (they still remain hidden somewhere). In any case, our current line-up is very solid and healthy. Our collaboration with John (who is a personal friend of mine) happened very naturally. I just called him on the phone and the story went like this: “ – Hey man, where are you? What’s up? Do you wanna join Mentally? – Hey motherfucker, everything is fine. Yeah sure, let’s do it!”

Alex – Yeah we’ve changed like a million members since 2009 hahaha. We had lot of lineup problems during that time that didn’t fix up until early 2014, all for different reasons but I think it’s best not to discuss them here. All kidding aside, it’s a hard job starting over as a new band every time, blending with new people musically, having everyone fit into each others’ personal time-schedule and seeing it not working, so sometimes changes are inevitable and really destructive to a small band like us.

We’ve always been in awe of what a relentless beating J. Maelstrom delivers to a drumset, live or in studio, so when we heard that he might be available and willing to play we were out of our minds. We contacted him and he was really excited to join up as well, as a full member too. He’s really easy to work with so everybody’s really happy and I think that can only reflect well on our live shows.

Where did you record and mix the album? Alex – We recorded the guitars and the vocals in Made In Hell Studio (cheers David), the drums in Eleventh Tower Studio (with Vaggelis F. on drums), the bass was done in Garruk Studios and the mix/mastering was done by Haris in Feedback studios.

The cover art is as good as it gets. How did you approach Andrei Bouzikov? IronBeast – Andrei was familiar to us from his magnificent work with bands like Toxic Holocaust and Violator. We contacted him, told him what we wanted and then gradually the cover art evolved into its current form. I have to admit that he was not cheap at all, but since the result was exactly what we had in mind…let it be!

What bands have you been listening during the creation of Aptitude, and generally which are your influences?

IronBeast – Personally, as far as I can recall, I was listening to Discharge, Massacre, Obituary, Doom, Led Zeppelin, D.R.I., Merciless, Ratos De Porao, Iron Maiden and Tankard, while during some weird times I resorted to Skazi and Atari Teenage Riot. Quality and variety…don’t you agree?

Alex – Nothing you won’t expect to hear from your average joe thrasher. Our greatest influences as a team are bands like early-Sepultura, early Exodus, Slayer, Death and the list goes on about bands we grew up listening to. I personally adore Demolition Hammer, Forbidden and Exhorder and similar masterpices that came out in 1990. I’m more influenced by the sound and the attitude those albums had, on that side of the atlantic that period.

What about concerts and future plans…

Alex – There are definitely going to be shows to promote “Aptitude”. We were really lucky to have the album out on the Tankard gig in December in cd format and we’re waiting for the vinyl version to come out in these next few months before we hit the road for the old-school fans. We’re itching to record songs that we couldn’t fit in “Aptitude for Elimination” and new stuff with this lineup. I think we owe it to ourselves as underground fans a decent 7” Mentally Defiled split. But until that becomes solid we can only work on music and jam.

That’s all folks! Thanks for your replies, Τhrash ‘till Afterlife and the ending is yours.

IronBeast – See you in a live gig (not necessarily ours), a square, a park, a moshpit, a beach or wherever else to have a good time. Hehehehe – CHEERS!

Alex – Cheers, hope to see you in a club thrashing your neck out. 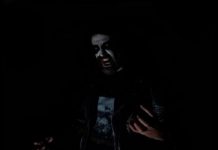 Stheno: return with a new album via 7Degrees Records