It came as a shock when Arch Enemy announced that one of metal’s favorite front women Angela Gossow was stepping down to pass the microphone to Alissa White-Gluz. Unknown to some, well-respected by others from her work with The Agonist (which she had been forced to leave the moment she joined Arch Enemy). The metal community was in uproar with haters and believers on both sides. Still, voices turned more and more positive with the official release of the video of “War Eternal” and later the lyric video for “As The Pages Burn”. While Angela is missed by all (except for those few haters that still live in the 90s and keep screaming for male vocalist Johan Liiva), many fans seemed to appreciate Arch Enemy’s new front woman. Let’s take a look at the whole album, shall we?

The album builds up with the intro “Tempore Nihil Sanat (Prelude in F minor)”. Teasingly slow it builds a threatening mood (including choir!), only to fall silent for a second and then burst into the first guitar notes of “Never Forgive, Never Forget”. We are assaulted by White-Gluz’ first long scream and she means business. We hear Arch Enemy’s typical aggressive melodic death with the intro guitar pinch returning occasionally, making this song instantly recognizable. “War Eternal” was the first song released from the new album that divided the fans of the band. In the meantime I have grown to love this thrashy track and I am sure many fans will be shouting along live this summer on the festivals. The melodic chorus and solo near the end still sound 100% Arch Enemy so nobody needs to worry that the new vocalist means a new musical approach. The second released track “As The Pages Burn” had a very different feeling and contained lyrics written by White-Gluz. In all interviews she is positive about how the band received her and how she got involved in writing the lyrics next to Amott. “As The Pages Burn” breaths older Arch Enemy songs like “We Will Rise” or “The Immortal”.

“No More Regrets” sets in with a fast guitar melody and this remains the signature sound throughout the song. Halfway the song Amott and Cordle decide it’s solo time and they take the song down for a while. When they pick up the first part of the song again it gets a little bit repetitive. After a slow fade out, “You Will Know My Name” takes a slower start and gives the first chance for breath. A very special build up here with synths and Erlandsson’s percussion. When the song really kicks off, you can’t help noticing that White-Gluz really sings in the same style as Gossow, while fans of The Agonist know she is capable of much more. In interviews neither Amott nor White-Gluz denied the fact that Arch Enemy might one day introduce Alissa’s clean vocals. I’m sure that will create another shit storm between fans, but the haters don’t need to worry about that for now, on War Eternal White-Gluz barks away throughout the entire album.

“Graveyard of Dreams” is the first instrumental intermezzo of the album, an Arch Enemy trademark I have always appreciated. So at this point I can’t say anything else than just ‘enjoy’. “Stolen Life” is a typical Arch Enemy track, but does not stand out compared to the others. “Time is Black” was the biggest surprise on the album for me, starting off with sounds of a baby crying and keyboard playing almost a lullaby. More synths join in to build the tension before falling into a perfect head banging riff which returns a few times throughout the song. Also the chorus is very symphonic and near the end we even hear some strings with the guitars. We fade out with that same gloomy piano lullaby… Close to the 3-minute-mark “On and On” breaks down into a perfect moment to hear a few thousand metalheads shout along the song’s title. Slow and powerful, again and again, ‘on and on’… I definitely hope to hear this song live one day. “Avalanche” has a lot of symphonic elements, something you can hear in abundance on War Eternal. After the decent “Down To Nothing”, War Eternal closes with “Not Long For This World”. Another amazing instrumental track, slow and doomy, fading out into a dying heartbeat until all is quiet.

Arch Enemy has produced a killer album, far better than Khaos Legions, and maybe one of the best in their whole discography. And with a perfect timing as well to accompany Alissa’s introduction. No, she is not Angela who will be missed for her amazing stage performance and everything she brought to the band. But Alissa brings a new dynamic to the band that offers a lot of future potential. She too is bursting with raw aggression and what I’ve seen so far online she is quite killer on stage as well. The future lies forward and it sure looks bright for the new Arch Enemy. 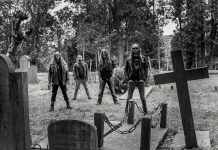