Swedish legends At the Gates are demoing what will be their overall seventh album, and third since their comeback record in 2014. The album will also be the first to include new guitarist Jonas Stålhammar (God Macabre) in the writing process. They also posted a photo on instagram of some books that inspired their lyric themes tha texcited their fans.

According to drummer Adrian Erlandsson, At the Gates has eight new songs demoed and “many more ideas yet to be developed and completed!!” You can hear some of the new material at the end of the below video. 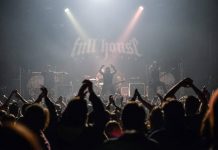