We all have read hundreds of tributes in magazines, webzines, fanzines, blogs in this country. Each and every one of them has an inclination to praise those pure, unspoiled years (?) which I have a hard time defining, or all those unspoiled musical subgenres (which I find even harder to define, damn you parthenogenesis!), while there is an obsession about Thrash and mostly Teutonic Thrash and of course statements like “1986 was the year boys became men” are mandatory. Of course our geographical position, the scrappy information about new releases or other musical genres and behavior / consumption manners becoming the targets in the past years, or simply because some editors or djs or concert organizers didn’t promote it for their own reasons, the Crossover genre never flourished in Greece. Suicidal Tendencies are a bright exception, making a breakthrough and having a relatively large impact on the metal audience here. The records we will eventually have to write for Metal Invader either for the Tributes column or here are more than many and probably here would be more fitting, to tell the truth. There are many forgotten diamonds like: “Will Work for Food” of Uncle Slam, Beowülf’s or the Brood’s self-titled albums, “Experiment in Fear” of Evol while we saved our reputation by writing a few words about No Mercy’s “Widespread Bloodshed / Love Runs Red”.

Beowülf is one of the most characteristic crossover/thrash bands that came out from the notorious Venice Beach of California. They were formed in 1981 (named as Black Sheep) by Michael Alvarado, Dale Henderson, Mike Jensen and Paul Yamada. They were pioneers of this sound and the Venice scene along with Suicidal Tendencies, Los Cycos, Neighborhood Watch, No Mercy, Excel and Uncle Slam though they never had the commercial success or recognition beyond the circles of the scene as happened with ST. This played a key role as well as the several changes to the lineup led to the band’s dissolution in 1995. After a five year break, they reformed until 2011. During that time, they released 2 studio albums, with the last one being “Jesus Freak”, while 2007’s “Westminster & 5th” being its predecessor. Overall, they released 6 albums and we come across many of their songs in 4 compilations of bands from Venice, of this mixture of skate punk, hardcore, heavy metal and thrash, that can actually be good guides for those who want to dive deep into this field (for example, check “Welcome to Venice” of 1985 or “Farewell to Venice” of 2007). I should point out that Henderson was the only original member after all those lineup changes I mentioned before. Their classic lineup is: Henderson (vocals), Mike Jensen (guitar), Paul Yamada (bass) and Michael Alvarado (drums).

Back in 1981, Black Sheep with Dale Henderson on vocal and guitar duties, Mike Jensen (ex – Neighborhood Watch) on guitar, Paul Tsutomu Yamada on bass and Roger DeGiacomi on drums, they begun playing music at parties and clubs locally, until DeGiacomi became their manager. He was replaced by Michael Alvarado in 1983. It was then when Beowülf became their name (probably they were inspired by the famous English poem, even though I got the feeling that they chose it just for the sound of it). They used frequently the “acronym” BWF (with the letter F written backwards) in graffiti’s all over Venice. In 1985 Mike Muir signed them with Suicidal Records, for which they recorded “Taste the Steel” and “Unicorn”, tracks included in the “Welcome to Venice” compilation, as well. In 1986 they released their exceptional same titled debut (what an artwork!) via Suicidal Records and in 1988 they recorded “Lost My Head… But I’m Back on the Right“ before joining Caroline Records. This was their last release with the classic lineup.

This time the artwork was plainer; it was essentially a photo of the band, even though this change didn’t mark any different sonic or musical direction. Right from the start, the record begins with one of the best tracks the band has ever written “Muy Bonita”, which sounds as if Lemmy sings Suicidal Tendencies or Cyco Myco covers Motorhead! In general, Henderson’s vocal qualities resemble Lemmy, while the guitars are Heavy Metal in many songs, with solos, the rock n’ roll rhythms and that dance proto thrash that characterized Motorhead. In a broader spectrum, Beowülf seem like Megadeth (in “So Far, So Good…” ) are jamming and Suicidal Tendencies are jamming on their songs and some songs of Motorhead! “Cruisin” is an amazing track and I really wonder why has it slipped through the fingers of all those passersby, who listened to “rock” in high school and turned every great song into an over-heard boring one. The composition in this track could easily be Alice Cooper’s.

“Muy Bonita”, “Fuzzy Princess”, “Hippy Liquor”, “Done Got Caught”, “Where You From” and “Cruisin'” stand out, without the rest of the tracks lacking something. All of the tracks (all 12 of them) have something to offer, and why shouldn’t they, since they are based on brilliant melodies, changes of rhythms and not always fast speeds. Their uniqueness is exceptional as they mixed traditional heavy metal with hardcore / punk, an attitude which was overflowing, thought didn’t patronize the final result. This balance they managed to keep being old – school on one hand and modern on the other, made them likeable to those stuck in traditional forms. Simultaneously they appealed to the fresh blood that was thirsty for something new and more urban, instead of listening to themes of dungeons και dragons sung by men with furry underwear and swords made of plastic (despite the fact that many people dig them). It’s worth of your investment! Even though it’s addictive, don’t worry, you won’t have the need to acquire a skateboard, especially if you’re over 30. If you get the urge though… 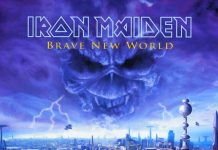