Black Breath have auspiciously reached their third full length record, leaving behind that Entombed-core style of music, of which they were characterized indeed rightly. It’s not that our appetite was spoiled by this hybrid of old-school Swedish death metal with hardcore and crust elements. On the contrary, that was the main reason why these Americans had spiked our interest and made us worship their previous works, including “Razor to Oblivion” of course. Forget the frantic death n ‘roll rhythms; forget the continuous d-beat tempo. Here we’re talking about pure death metal in the footsteps of the amazing Swedes Dismember, with hellish thrash and old-death metal riffs succeeding one another throughout the course of the record, characterized by Metallica styled tuned guitars in melodic parts / lead and the clearer-while-harsher vocals of Neil McAdams. I would be exaggerating if I talked about progressive passages and overly technical moments, but we must mention Kurt Ballou’s production that gives you the impression of getting the best of E. Wallace and Mark Palm. The key factor of their sound is no other than this “Boss HM-2 Heavy Metal Pedal” but without the hardcore elements enriching it, it honestly feels like you hear a completely changed band. There are times when you think you listen to the ‘84-’86’s Metallica’ – it goes without saying that this is something good / positive and there is a general feeling of an effort to create something completely different from their previous works, but always strictly within the narrow framework of the old school death metal genre. The “Chains Of The Afterlife” closes the record as another “Orion” brilliantly. Among the tracks that pop out throughout the record are the record opener “Pleasure, Pain, Disease” and the title track, which makes you think it sprang out (like the first one) from “Like an Ever Flowing Stream”, the “Seed Of Cain” with its simple chorus and finally “Burning Hate”.

• Another masterpiece as a front cover from Giraldi… 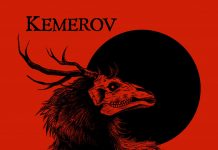