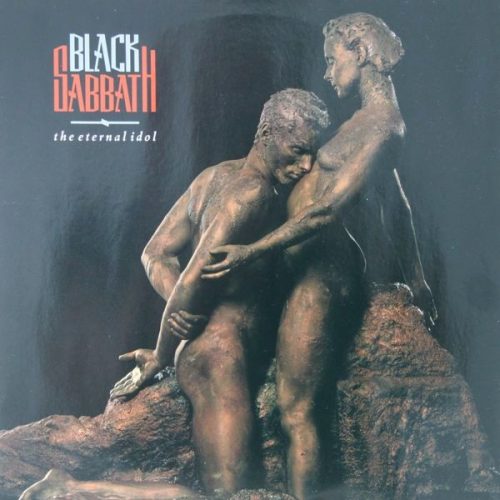 You and I are victims of their word
As the masters of power try to poison our world
Greed, money taken over their souls
Just mechanical brains, politicians don’t know
They just don’t know, know, know

In a period where thrash metal scene was at its zenith, the Sabs were suffering from continuous line-up changes.  Coming out of Seventh Star’s haze, 1987’s “The Eternal Idol”, was about to put Sabbath on track again, preparing the field for the so-called Tony Martin’s era. Iommi still had riffs left in the tank, enough to at least sputter in an upward direction. Idol totally soared to the demands of the ’80s without losing its medieval elements. Idol also spent six weeks on the Billboard 200 chart, peaking at 168, though its reviews back at the time were not dithyrambic at all. To be noted that also in November 1987 Venom released Calm before the storm, Def Lepard- Hysteria, Celtic Frost- Into the Pandemonium, and Candelmass – Nightfall.

“I’d like to have seen some of the stuff off The Eternal Idol be a bit more credited, because I think there’s some good tracks on that album like ‘Ancient Warrior’ “

After Black Sabbath’s Born Again Tour was completed by the mid-eighties (1984), Black Sabbath had become more like a Tony Iommi’s solo project given all the line-up changes. For many, this moment is considered to be band’s most crucial era, as it defied Black Sabbath’s continuance. Tony Iommi started working on his first solo album Seventh Star. It is said that Iommi was committed via Sabbath’s contract with Vertigo to release at least one more Black Sabbath album. Record company’s intention was the album to be released under “Black Sabbath’s” name, no matter how it was recorded or who performed in it. Seventh Star was released after all in January 1986 under the name Black Sabbath featuring Tony Iommi, which guaranteed Sabbath’ continuance throughout golden 80s, something that probably wouldn’t happen either wise. Mighty Glenn Hughes – at the time involved also to Galley brothers’ project- Phenomena I (1985)- that did the recordings on the album, was also along with the band when Seventh Star’s touring had started. Unfortunately, there were times when Hughes was unable to perform, with him being in his darkest hour as admitted later by him, dealing with serious drugs issues. Another side of the story is that Hughes wasn’t really fond of performing songs that weren’t really supposed to be Black Sabbath. Another rumor going around was that he lost his voice due to injuries of getting into a fight. After just a week of touring he was replaced by Ray Gillen. Overall the tour was a commercial failure, with lots of shows being cancelled.

The making of the album:

So Ray finished the tour, and the band began working on the new album – “Eternal Idol”. Ray did vocal recordings on the LP (Air’s studio sessions in Montserrat- Caribbean Sea). Band’s official statement that Gillen was about to be dispatched from the band due to that fact that he didn’t have strong enough songwriting ability (he actually quitted shortly after their return to England)… Most probable scenario is his continuous efforts to hide the fact that he was diagnosed as a HIV- positive even after he was asked about admitting it… It is also said that management wasn’t even paying him. Anyway, whatever the reason, bassist Bob Daisley (Rainbow, Ozzy Osbourne, Uriah Heep, Gary Moore, Dio) was brought in to assist to Idol’s compositions. This is particularly weird though ‘cause sleeve credits mention Dave Spitz (brother of Anthrax’s Dan) as the bass player. Ray’s departure was not the only problem raised, financial and management issues (band manager was fired during recording sessions) were also brought into the surface. Shortly before the “Eternal Idol” tour was about to begin, drummer, Eric Singer, left the band too.  Gillen was eventually replaced by Tony Martin, and tracks of “Eternal Idol” were rerecorded by Martin under the guidance of Chris Tsangarides at Battery Studios shortly before the album was finally released in 1987. Demo versions of The Eternal Idol featuring Gillen do exist. Also, in an interview, Martin revealed that the sinister laugh heard on the track Nightmare is in fact Gillen‘s voice. The album was re-released on November 1, 2010 in Europe in a 2-disc expanded set including a bonus disc with Gillen’s recording. “Nightmare” was initially written for the third Nightmare on Elm Street movie, but never finally made it.  Most tracks were written by Tony Iommi and Bob Daisley (the vinyl version states that all songs were written by Iommi though) although some lyrics were modified also by Geoff Nicholls. It was also the last full album of new material by Black Sabbath to be released by Warner Bros Records, and the final album through their original label Vertigo Records until the release of 13 in 2013.

The album was rereleased also on 1 November 2010 in Europe as a two-disc expanded set. Bonus content includes the aforementioned b-sides “Some Kind of Woman” and “Black Moon” on disc 1. Disc 2 contains the session for the album recorded with Ray Gillen on vocals. A three-minute and fifteen second studio outtake titled “Some Kind of Woman”, written by Tony Martin shortly after joining the band, appeared as a b-side of “The Shining” single. An early version of “Black Moon” – a song destined for Headless Cross – was released as a b-side of the “Eternal Idol” single.

Drummer Bevan and original Sabbath bassist Geezer Butler were hired for the upcoming tour. So there was reunited the three-quarters of Born Again tour line-up (Martin on vocals instead of Ian Gillan). However, Butler backed out on learning that Sabbath had booked dates in apartheid era South Africa. Nicholls played bass for a few shows before Jo Burt was hired. Bevan was also replaced by Terry Chimes (The Clash), who appears also in “The Shining” music video. Martin said in an interview of his: “The bass player in the ‘Shining’ video was some guy that we dragged off the street. I can’t remember his name but he looked the part. He said that he was a guitarist. I remember he was always talking about how he was a Red Indian, thus all the turquoise he wore! We never saw him again.”

In his all too short career Gillen had the distinction of recording an album with Black Sabbath, but apart from that, he recorded some demos in 1987 with John Sykes’s first attempt forming Blue Murder. Ray also participated to musical collective Phenomena II. In 1988 he teamed up with guitarist Jake E Lee, who had left Ozzy’s band. With a desire to write their own material, avoid record company interference and outside writers, and emulate their heroes of Led Zeppelin and Humble Pie, they formed Badlands. Finally, he passed in 1993 bitten by HIV.

The story behind the cover

The album cover features two models in bronze paint re-enacting Auguste Rodin’s 1889 sculpture “The Eternal Idol”. Due to the paint’s toxicity, the models were hospitalized after the shoot. A photograph of the original sculpture was intended as the cover art, but permission could not be secured. Eternal Idol has many interpretations, which is what Rodin’s art was all about. From their expressions, the two subjects appear to be lovers. Experts speculate that the piece sourced inspiration from another sculpture called Sakuntala, which Camille Claudel modelled for. One interpretation is the close relationship that Augustine had with Camille. The man in the sculpture is enamoured with the woman and seems lost in helpless admiration. It looks like a mixture of love and lust. With his hands at the back, the position depicts submission. The positioning of the woman above the man plays into this theme. Eternal Idol is one of the artworks by Rodin that blends impressionism and symbolism.

Beneath perpetual confusion, Sabbath made an album that at the very least is worth revisiting, or examining for the first time if you’re not up on the band’s ’80s output. It may not be entirely themselves, and yet it still feels like no one else could have made it but them. The final result doesn’t sound all over the place and sees the band return to its doom and heavy metal roots. The record attempts to go back to Black Sabbath’s trademark sound but fails to develop the unique charm of the early years or even the more experimental albums released in the mid-eighties. The band doesn’t have much chemistry which isn’t a surprise considering the revolving line-up. The rhythm section sounds bland and uninspired. The guitar riffs are often repetitive and unspectacular. New singer Tony Martin has a very melodic voice with a slightly rough undertone. The gloomy keyboard work is the only element that can be described as truly convincing and that’s a shame for a heavy metal album.

When Atlantic technically dropped Savatage because of the poor sales of Fight for the Rock, Jon Oliva had the chance to claim the position of Black Sabbath’s lead singer. Jon Oliva recalls “It was somebody from the management office for Black Sabbath that approached me”. “I did have a set list of songs that I would have to sing at the audition, “War Pigs”, “Paranoid”, “Sweet Leaf”, “Symptom of the Universe”, “Iron Man” and the “Black Sabbath” song.” However, that audition never happened and I don’t think there would ever be a possibility that Jon Oliva would end as the singer of Black Sabbath during 1986-1987, no matter how interesting that could be.

In the wisdom of the prophet’s
never ending tale
open up the eyes
within your mind, he says