While there hadn’t been much of activity in Blodhemn’s early years, the 10’s now feature three full lengths by this project, which doesn’t shy away from a very traditional sound of their country’s black metal. “Moteinevig ruin” stays within the vicinity of this specific style, which has been maintained by the band for all these years and is part of the current Norwegian scene. The record might not be surprising, and at times it is a bit predictable, but a few more specific characteristics give it some justice and save the day.

The idea to use broken bottles with the name of the band, as well as their creation year in the cover art, instead of something skeleton-like that black metallers see every day, is a good sign to begin with. As expected, “Mot einevig ruin” has a very clear production, the listening process is made easy, but I would like the bass to be more apparent across the tracks. Technically, Invisus, the only main member of Blodhemn, has done a great job with the drumming of the album, as well as the guitar lines and the ideas for the songs.

What is the most recognizable and enjoyable part of “Mot einevig ruin” is the unique shrieked vocals he does, which would be a main key to pick out Blodhemn among other Norwegian black metal bands. At times, the compositions themselves lack their own character and they are created from standard Norwegian black metal motifs, which is also the case for the middle-paced tracks and the more epic moments.

While masterful melodies come up in tracks like “Nordhavsspeil” (especially the middle part), and “Uante Krefter I Fra Nord”, which touches a bit of post-black metal too, other tracks do not really deliver (a black’n’roll part in “Døgenikt” made the whole track weaker, for example).

The faster compositions are all well written (“Blodhemn – Dra Te’ Helvete”, “Det Gjekk Ein Faen”), and in combination with these great vocals, the result is indeed remarkable. My only issue comes with the originality for “Mot einevig ruin”, which is a good overall offer by the band, but not to an extent that I would place it among the highlights of my playlist. The fans of Norwegian black metal would definitely enjoy this and it deserves a thorough listen, as it will bring in mind elements from some of the giants of the genre. 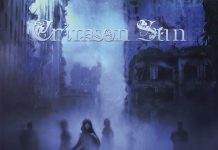