I find it really hard to line up my thoughts and properly imprint in the most appropriate way what’s happening with Bölzer’s latest release entitled “Hero”. The Swiss Beast managed to overcome its own self and automatically expand the horizons that mentally identify / demarcate the Death / Black genre. At the same time, “Hero” totally vindicated our expectations and explained in its own terms why Bölzer have such a solid and loyal ‘cult’ following, despite the fact that the music they create by default appeals to a limited amount of listeners.

I can’t find the suitable words to explain what actually happened in “Hero”, but each hearing of the record pinched my heart. Each hearing made me ache as if the most suppressed emotional and intellectual pain surfaced and manifested itself in the most violent ways. We’re dealing with a tremendous release that shook the Earth we’re stepping on; a disastrous sonic quake that can actually change the course of the Extreme / Experimental Black / Death Metal down the line.

Bölzer implemented a different approach this time on many levels, especially concerning the vocals, a matter we will elaborate on later. “Hero” features a remarkable uniqueness, with a characteristic originality found in the compositions; an originality that reeks of a special kind of passion and devotion. Most of the guitars and drum patterns follow theoretically classic fast Black / Death patterns; however the catchy, leitmotif kind of riffs and the intelligence of the compositions in general, make “Hero” an absolute winner. Apart from the fast moments, the tracks feature glorious doom parts, where rhythms are taken down a notch and combined with the perfectly mixed bass and the depth it provides, they offer an unearthly experience. Bölzer even used oriental sounds and whispers (pay attention to “Phosphor”), even ritualistic choir vocals (intro of “Decima”), proving that combining different kinds of music in an elaborate way can result into perfection. So what’s the aftermath? There’s a fathomless depth in the structures. I keep listening to the record and almost every time I notice something different and new ‘things’ to fixate on. I guess it’s a record that once you let it grow on you, it’ll never stop; therefore you’ll be forever caught in its web.

No one can deny the fact that Bölzer sound more ‘progressive’ this time. Despite the asphyxiating tones and the suffocating yet anthemic moments, there’s a certain prog essence lingering, with more melodies in the compositions (comparing this release to its predecessors).

What one can easily distinguish listening to Bölzer’s new release is the changes in vocal delivery. This time Bölzer took a turn and used cleaner vocals; a change that surprised me in a good way, as I felt that this time everything fell into place and we saw the band’s ‘real’ face. The cleaner vocals rocketed the final result. In this particularly chaotic kind of music, the clarity of vocals attaches a certain quality of splendour, of magnificence. This ultimately majestic piece of art has a soul.

Moving on, staying true to their game once again, Bölzer succeeded in creating an eerie yet ritualistic atmosphere, that in league with the occult character of the lyrics, you feel like a part of their rites. Esotericism, mysticism and the eagerness to search your inner self and its frightful dark corners is what “Hero” offers lavishly; an exaltation of the spirit through mournful yet sublime passages.

“Hero” acts like a drug; it makes your world spin out of your reach and it is massively addictive. I cannot remember how many times the record spun. It doesn’t matter anyway. It’s an astonishingly creative album, with spanking executions of the tracks and overall delivery. It’s a record full of stellar, resplendent ideas with an incredible production, mix and master. “Hero” can become utterly personal as time passes and careful hearings succeed one another, as it’s capable of building an intimate relationship with the listener. Definitely one of the best releases of this year and I dare to say it could be one of the best releases ever of this genre. It’s a brilliant album by a band that for many years now has been setting the bar high, with members that have always been pushing themselves to the limit and frankly have never disappointed us.

[Note: Urðr, The Archer and Hero are the best track sequence of the year. Splendid tracks from every point of view.] 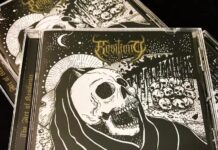