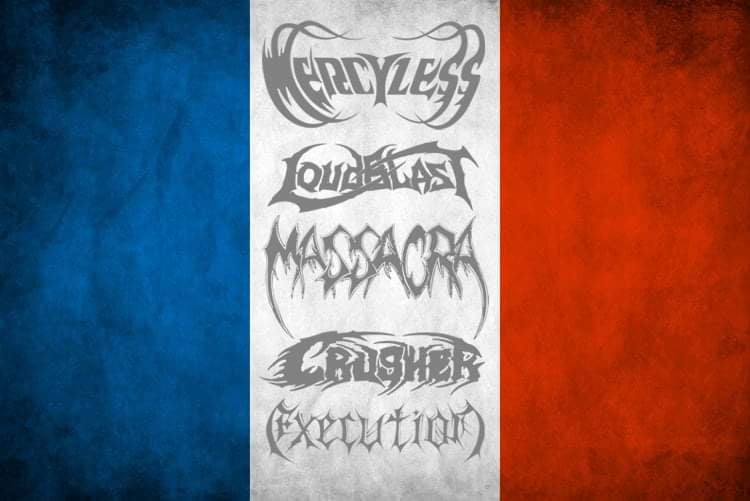 While U.S.A. and Sweden had the strongest scenes and U.K. and Holland to follow, France was creating something important and different that was definitely overlooked by many fans… Like Brazil had full attack and Germany strong defense in football but France had Zidane, Karembeu and other great midfields full of quality… words by Kostas Vaxevanos

Fully emotional expressed album where melodies and pessimistic parts exchange with severed nerves and outbreaks. My memory goes to high school when i found this masterpiece for only 3 euros. Underappreciated, but lucky me. Joins me till today. Morbid Angel’s paranoia of “Blessed are the Sick” and the European essence of “Testimony of the Ancients” under the direction of Colin Richardson. Not his usual clean sound ‘cause Mercyless are more dirty. They unfold their full talent with a variation of changes. It took me some time to get into it as with many technical albums, but there’s the magic hidden. With every listening you discover something new. The majesty of their uniqueness can be heard on «Mirror of melancholy» with solos that make me want to cry. The instrumental «Agrazabeth» and the violin on the back cover explain the intellectually capacity of the French. From the first bands that taught us well played and genius death metal. Au revoir!

The archon of all Death/Thrash albums. Don’t expect French delicacy here. Only hate and furiously kicks in the mouth. The vocals by Stefan and Fred (RIP) have the characteristic exotic accent similar to Max Cavalera on early Sepultura albums. The maniacal riffs follow one another and the rhythm section is powerful and feasting on pounding flesh. Slow parts like the opening of «Full of Hatred» smell like burnt ground, remains and ash. One of those albums that will leave no neck unbroken and is for sure relative with Beyond the unknown, Epidemic of violence and Ten commandments with obvious influences of Kreator (especially in the harshness of the vocals) and Slayer!

A well-crafted masterpiece is the third and most complete album of the French. From the refined cover and the gongs of «Presumption» you understand that here the quality is on other top levels. Influenced by Death – Human and Cynic – Focus. Sonia does backing vocals here as in the album of the Americans. Creative, clever Death metal without getting the listener tired and looking into the eyes of Testimony of the ancients. The production at Morrisound studios is a guarantee and the ideas make an intelligent album definitely ahead of its time without losing the power of the early wave of Death metal. I will give special mention to the drums which are solid and to one of my favorite songs of all times, “My last journey”. A diamond for fans of Atrocity (Germany) and Oppressor (U.S.Α).

Crusher’s debut album is a classic example of criminal negligence. I have played it thousands of times and although it is technically expert its elements point to more mid paced bands like Obituary and Baphomet. The sound carries the saliva bass of Dead Infection and the fast beats come from the hardcore origins when they were still called Frayeurs and made three demos until 1991. That’s why the most social lyrics. The whole album is full of riff feature of a French band. The vocals suck you, the drums chip you and the bass slaps you. The forty-two minutes will reward you with pure death metal of another era…

Some would like No Return or Aggressor here but it is a purely personal choice. The band started as Thrash / Death and evolved into a more melodic one. The material here has ultra-heavy cement guitars and grooves. The sound may be reminiscent of early Therion and the vocals are quite experimental giving other dimensions. In the song «Ocean» Sophie’s ethereal vocals and the solo are fantastic. Then comes a slow point that swallows you, like the depths of a catacomb. The power of the EP breaks your ribs and the despair that comes out monumental, haunts you and travels you at the same time. Something unique…

Integrity – Humanity Is The Devil