dedicated to my mate André Scaramanga for his valuable assistance

A language is a structured system of communication. Language, in a broader sense, is the method of communication that involves the use of – particularly human – languages, in order to conveying meanings from one entity or group to another through the use of mutually understood signs, symbols, and semiotic rules. The word “Globalization” has a negative meaning to the majority of humanity, but on the other hand internationalism, a word that many confuse with globalization, is the salt and pepper of the miserable western way of life. Finding different people and their way to see things that you also love or things you ignore and learn something new is an incredible thing, at least to me. Brazil has more to discover than cult heroes Sarcofago, Angra, Ratos de Porao, Viper or Thrash titans Sepultura… And I think it’s time to learn little by little more about this country’s remarkable scene…

If we speak about traditional metal then my first thought would definitely go to Centurias. Back in mid-80’s Brazil easily had a lot of bands that were keeping the flame burning while defending the faith…like Made In Brazil, Patrulha Do Espaco, Harpia, Virus, Abutre, Salario Minimo, Cerbero, A Chave Do Sol, Ave De Veludo, Ethan, Lixo De Luxo, Gozometal, Santuario, Nostradamus, Anacrusa, Mammoth, Ana Luz, Antitese, Korzus and, of course Centurias.

Paulo Thomaz (drummer), Eduardo Camargo (vocalist), Adriano Giudice (guitar) and Rubens Guarnieri (bass) featuring the band’s line up in 1985. They entered the studio in October 1985 and recorded one of the best Hard Rock albums sung in Portuguese, the EP “Última Noite”. Even though it was already time for the masses to move into more extreme genres and furthermore especially into bands that sung in English, still Centurias as they believed in their vision kept on dreaming and playing the music they loved. Later, due to musical differences, they had some members’ changes leaving only their drummer Paulão from the original line-up. The band recruited from Santuario Cesar “Cachorrão” Zanelli on vocals, the ex-HARPPIA Ricardo Ravache on bass and Marcos Patriota on guitars . This line up turned to be successful as together they recorded the LP “Ninja”. Launched in 1988, “Ninja” follows 3 years after the EP Última Noite” (Portuguese for “Last Night”), bringing Centúrias more focused on Traditional Heavy Metal, Power and Speed.

The cover artwork was a creation of Arnaldo Colón, a personal friend of the band. Initially, the idea would be to make the cover with a night photo of the city taken from some viewpoint and if this project went ahead, the album would have the title “Lost City”. As they chose the illustration, it ended up entitled “Ninja”.

t, of course Maiden you will hear things you dig in Centúrias. If you have a well-trained ear that can easily distinguish influences or elements that bands borrow from their idols or other bands they are fans of, then you will probably notice some N.W.O.B.H.M. parts that will bring you in mind Blitzkrieg, Satan and Tredegar. Besides the resemblance with Brian Ross in vocal lines, we can find also similarity with the glorious French scene as both languages sound so exotic to our ears (let’s be honest UK bands and US ones sound more conventional to the majority of metalheads around the world) and whoever likes Blaspheme or Sortilège will find something charming in songs like “Senhores da Razão”, “Animal”, “Arde Como Fogo – To Hell” and “Fortes Olhos” that really stand out.

The riffs are clever and the rhythm section solid with all instruments audible, despite the fact that the production isn’t so clean. Finally the song structure is simple if not naive for today’s metalheads, but c’mon who can blame Centúrias for sounding old school or too 80’s?  The album was recorded in 1988 guys, for Christ’s sake! 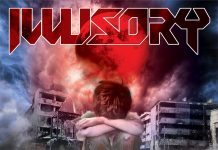