Greek rebels Chainsaw are back with their first album since their ”Hill of Crosses” debut back in 2014! Not much has changed in their music: the band stays loyal to their Motörhead-inspired thrash metal, in the veins of ancient Sodom, Venom, At War, Gehennah (a great cover on “Demolition Team” included here), Infernö. This is no place for innovators, neither for pioneers: this is pure thrashing rampage for thirty seven minutes – the perfect soundtrack for drinking beers and mosh-pit. No highlights stand out either; this album could be described as a hot-shot, enjoy it at once and as a whole! It should also be mentioned that sound production is very good for this genre’s standards. Last but not least, band members are well-known rascals in the Greek underground scene, participating in many quality bands such as Pile of Excrements (2 out of 3 members), Sacral Rage, Necrovorous, Demolition Train, Nightbreed and many more. Not much more to be said: fans of this sound should check it out immediately; the rest can listen to The Agonist… 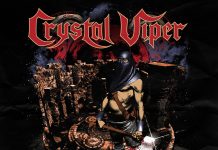