The C.R.F.’s 2017 first day headliner (June 30th 2017) is one of the most beloved artists in Greece, and one of the biggest bands that ever performed live in Crete, the mighty German metallers BLIND GUARDIAN, for an exclusive 2017 show in Greece!!!

Blind Guardian, started as Lucifer’s Heritage in 1984, but their debut album “Battalions of fear” was released in 1988, in a speed/thrash style, with significant Helloween influences. The following album “Follow the blind” was of the same level, but the absolute success and recognition came with the following four albums, “Tales from the twilight world”, “Somewhere far beyond”, “Imaginations from the other side” and “Nightfall in middle earth”. Their lyrics were inspired by fantasy fiction and authors like J.R.R. Tolkien, Michael Moorcock and Stephen King. Blind Guardian with their musical style managed to create one of the most faithful fanbase worldwide!

The next 4 albums were released in a more progressive musical path, followed by great commercial success and extensive world touring. Blind Guardian is one of the most beloved metal bands in Greece, having sold-out performances every time they hit a Greek stage. This is a two-way “love” relationship, as Blind Guardian always speak very highly of the Greek audience and Greece!
So, get ready for an unforgettable experience at Chania because … Valhalla rises at Chania this summer!!! 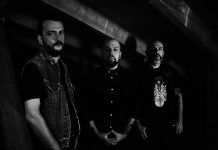