Smoke the Fuzz Gigs continue relentlessly to offer incredible concerts, this time with Descent Edition of Smoke the Fuzz Fest, a fierce 2-day festival with Belgians Oathbreaker and Amenra at Friday, April the 28th at Gagarin205 and American singer/songwriter Chelsea Wolfe with our own Skull & Dawn opening the gig at Saturday, April the 29th at Piraeus 117 Academy. Both gigs were organized perfectly, being absolutely faithful to the timetable. Of course we at Metal Invader would not miss it for the world!

The night began at half-past 8pm with Athenians’ Skull & Dawn show. They made us travel to a different time and place, where bourbon was illegal and you could get in a fight just for staring at someone (not that’s any different these days), with their dark folk/Americana sound. Adding members to their line-up (violin, backing vocals) and being clearly improved since the last time I watched them, they started their set with two new songs. Their improvement maybe had to do with Piraeus 117 Academy’s incredible sound, but in the end that’s a double-edged sword… a perfect sound quality will either help your or destroy you and those guys definitely came out as winners. They performed songs from their debut album “Zombie Horses” with much joy and tremendous technique as they moved from electrical themes to more dancy country rhythms with their impeccable dynamics that made them stand out. They closed the gig the way they started it, with two more new songs, one of them being about an imaginary night-out in Athens with GG Allin, which earned my love from them.

We listened to: Intro, Knoxville Girl, Kingdom of the Corn, Desert, No Longer Mine, GG Allin (still working on the title), Hail to the King

The lights go down; a dark ambience spreads through the venue for a few minutes, the bass surrounds me and all combined with intense photorhythmic lights made me lower my shields. Her band appears on stage, followed by Chelsea Wolfe under the sounds of “Feral Love”. She dances grandiosely while singing it, till she grabs her guitar and shakes the now full venue with “Carrion Flowers”. In an interview she gave me a few days back, she talked about changes in her bands line-up and the more jam-guitar style the new record’s going to have, a thing that was crystal clear on her set. We watched a very strong and heavy performance, similar to some doom band, abandoning a bit her ethereal side and entering uncharted artistic waters for her. Her perfect vocal abilities combined with her jaw-dropping presence wouldn’t let you take your eyes from the stage. On the same top level stood the sound and lighting quality which accompanied her show in the best possible way. Hers and her band’s professionalism isn’t something that you encounter every day. She played songs from her much acclaimed albums “Apokalypsis”, “Pain is Beauty” and “Abyss”, which took another form with her being an artistic chameleon, and also new ones.

We listened to: Intro, Feral Love, Carrion Flowers, Dragged Out, The Culling, We Hit a Wall, After the Fall, Simple Death, Iron Moon, Static Hum, Pale on Pale 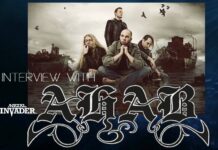