Great news for all the rockers out there! Circus Veil, a rock band based in Thessaloniki, Greece are coming back and hitting hard with two brand new tunes to keep you warm for the rest of the winter. “Goin’ On” and “Freakin’ Out” might be missing some “g”s, but the guys promise you the complete and uncut rocking experience. Both songs are coming out with their own very special video clips. Today is the day for their first official video clip to come to light. The clip released is for the band’s brand new digital single “Goin’ On”, produced by Kostas Fraggopoulos and Circus Veil at Shellac Studios (Thessaloniki). The video of the song was made in the band’s studio and was directed by Taz Ames (their bass player), Chris Angelis and Athanasia Molfeta.

And for those who haven’t checked them yet, here’s some info: The band has now been together for almost five years since their first rehearsal in their neighborhood’s studio, in Kalamaria, Thessaloniki. After their fist demo release in 2013 the gang kept frequently playing shows for the next year and finally entered the studio in the summer. As themselves stated: “Now that everything is all cold and wet again we hope to remind you of those crazy summer nights you can’t remember.” As for the future plans of the guys, there’s certainly going to be more gigs around Greece, more music and some special little treats. 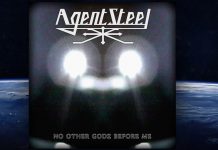