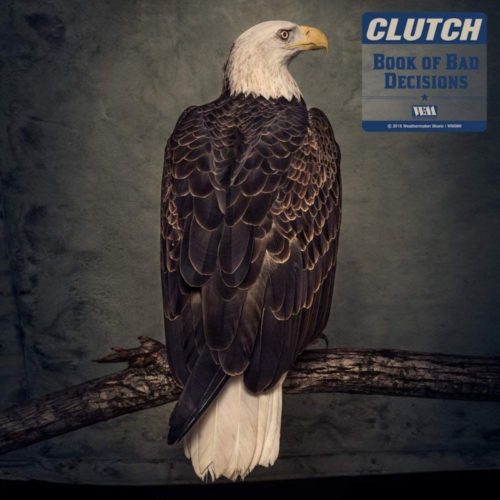 Clutch is the wet dream of every stoner/hard rock band in Europe as their testosterone fueled tunes have this red, white and blue aura that we can meet only in a spirit aged in new, charred oak barrels in Kentucky. This straight bourbon flavored bluesy, riff-centric hard rock may sound typical or repetitive to untrained ears but the main characteristic of Clutch is exactly this ultra-catchy made for bar soundtrack or live performances sing/shout-along funky rhythm five tone groovy rock ‘n roll. And truth been told ‘Book of Bad Decisions,’ is no ‘one track mind’ album at all. As Clutch issued four singles leading up to the release of it and each one of them introduces a different style of song, the whole album in its entirety is a mixture of genres and sounds. Probably due to the fresh air that the Grammy-winning Nashville producer Vance Powell brought to the band. Powell is well known for working with big names in country music, but mostly for capturing the live feeling of the recordings. Recorded in one room (in famous Sputnik Sound Studios in Nashville) for 3 weeks the band achieved to write down another track except the already 14 pre-recorded ones as a result of the extra time that the preparation offered them. Once again I have to mention that 15 compositions are way too much for a full length even in cd, mp3 YouTube years and in terms of how solid the final result is I guess a couple of tracks could have been left out. But which song would you cut off? I see too many instant classics, too many hidden diamonds that will stay in the shadow waiting from you to be discovered among ‘In Walks Barbarella’ , ‘Gimme the Keys’, ‘Hot Bottom Feeder’ (one of my favs) or ‘Lorelei’ , ‘How to Shake Hands’, ‘Vision Quest’ and ‘Emily Dickinson’… Lyrically speaking, we expected nothin’ less than beat poetry or breath taking story telling meeting sarcastic rebel attitude love letters to the things that marked not only Neil Fallon’s soul and personality but the course of the band also. ’Book of Bad Decisions’ is so well performed and almost perfectly crafted (with some hints of experimentation too) that can’t let down anyone searching for some original blue collar anthems to wipe the sweat of his backbreaking work or the 9 to 5 grind of selling yourself little by little in return of nothin’. The fact that fuckin’ hipsters also will download an mp3 version of the album shouldn’t be a reason not to invest your money on it or not lovin’ it.