Constantine is a Greek guitarist with a rich biography that includes Nightrage, Mystic Prophecy and Nightfall amongst others. This is his second personal album and it is quite different from his debut. ‘Shredcore’ was quite remarkable but the fact that it was purely instrumental and shredding in principle, restricted it to the target audience. ‘Aftermath’ has been produced on another logic, so that there is just an instrumental track, many remarkable guests in vocals and compositions cut and sewn in the style of each singer. Constantine harnesses his playing somewhat, in order to serve the composition, always driven by melodic, technical and modern metal. “Bushido” that opens the album is the only instrumental, with Constantine unfolding the composition with emphasis on melody but also some technical solos, of course. At “Hellfire Club”, we meet Bjorn Strid of Soilwork on vocals in one of the strongest moments of the album. A track that could be a top moment in any Soilwork album with Bjorn once again certifying that he is top of the brutal-pure vocal swings/changes and Constantine taking advantage of this event, whilst adding melody and groove. On “Press On Regardless”, Ralf Scheepers of Primal Fear gets the baton. Heavy composition with (up)lifting character as Ralf is very good at taking heavy compositions and making them even better. In “Another Day” we meet Apollo Papathanasio in a song that reminds more of his past with Firewind than his present with Spiritual Beggars. Very beautiful Power composition, perfectly harmonized with the throat of Apollo, stands out from the first hearing. In “Holding On ’Til The End vocals are performed by Chris Clancy of Mutiny Within, but here he only engages in clean vocals. Modern metal with an American logic that beats you with its immediacy and its catching refrain. At “Deliver Us” we greet Apollo for the second time. Modern power metal also here but with elevated speeds and more pompous style. Excellent for its kind. In “Elegy”, sung by Bill Manthos, we hear another catchy composition of modern-melodic metal. The album closes with “War and Pain”, with Schmier of Destruction giving the general command for destruction it seems. Thrash metal with momentum and roughness to dramatically close the album, becoming a song distinguished for its dynamism. “Afterμath” sounds very pleasant thanks to its diversity, its compositions and the many distinguished guests who leave their personal stigma. The album is out since May 31st this year through Rockshots Records. 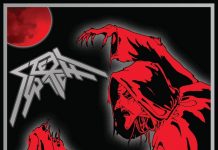