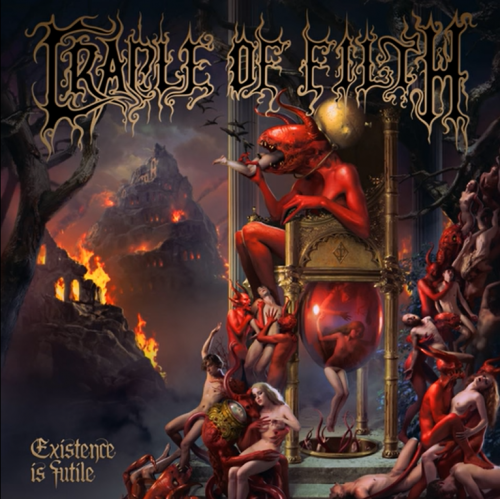 Cradle of Fith have been known for experimenting for the last 30 years with plenty of elements. Tales of macabre poetry, extreme melodies, atmosphere, alligned with the stars of doom, the UK legends have followed the greatest pattern of all times in their music; from the quartet of their prime magnum opus, to a raw and filthy dimension that introduced a more goth influence and less of a symphonic-ish black metal style during the 00’s, up to their constant uprising the past decade with “Hammer of the Witches” and “Cryptoriana”, the band unleashes “Existence is Futile”.

“Existence is Futile” brings under the spotlight a yet another fine addition to the band, whose name is Anabelle, whose vocal lines and instrumental parts are a strong reminder of the early band days. Considering the vibe and the influence these parts have in their arrangments in general, “Existence is Futile” comes straight from the early 00’s. Could it be a “Midian” follow-up, marking the band’s introduction into the new millenium? Most likely. However, symphonies are a lot more evident, and the lyrical stories far more simplified than they used to. This time, there are no tragic narratives of dark romance unveiled, rather than facing reality itself and the way it is introduced to our world, without a horror story. The horror story, this time, is our world in 2021 A.D. The entire album sounds like a mixture of their story, as a compilation that indicated the band’s evolution over the last three decades they have been dominating the gothic black metal scene in Europe. The tracks as the record goes by, flow in a very natural momentum. All parts are perfectly matched, no deny that Dani’s choices of weapon is far better than usual. Perfect guitars, keys, vocals, bass, perfect drums (God Martin, the meat machine!).

For fans that truly enjoyed albums like Thornography and never really complained, with a small reminiscence of symphonies that evolved through somewhere between “Dusk and Her Embrace” and “Cruelty and the Beast”. Also, “Suffer of Dominion” is the best track of the album, take no prisoners. Any familiar voices heard within?