CYCLOPEAN WALLS is an international Progressive Metal project founded back in 2019, in Paris, France, by Greek guitarist Yiannis Tziallas. Back then Yiannis was working on the project’s first songs, composing all the music and recording guitars, bass and keyboards himself. For the vocals he got in touch with Raphael Gazal -from the Colorado based, Progsters LEVIATHAN-, while Sean Lang and Jonas Schütz -both top names on the session drumming world- participated for some preliminary drum tracking.

The result was the EP “Embrace the Mythos” that was released on May 2020, in digital format, including four originals of lyrical and darkly shaded Progressive Metal based on the universe of the mighty H.P. Lovecraft.

The next chapter is a full length album entitled “Enter the Dreamlands”. It includes rerecorded versions of the EP’s material plus five more songs.

Listening to the entire full length someone can realize that there is a massive evolution going on -in many levels-. It seems that through this full length release the creator -Tziallas-, is fulfilling his overall artistic vision.

I am carefully listening the recorded versions of the tracks that have firstly appeared on the EP and the new tracks as well. I am actually realizing that the entire album material has been orchestrated in order to follow a very specific aesthetic that combines the Prog Metal, the classical and the cinematic vibes of the music.

Guitar themes are the main basis on the songs of this album. I do not want to use the word “riffs” because in many cases, the “riffing” is not the main standard in here. Tziallas is actually bringing to the foreground complete guitar themes mainly based on melodies, wonderful melodies. I am focusing not only on the melodies themselves but to this very specific way that Tziallas is developing and expanding them in order to generate the above described guitar themes that would finally complete specific parts on each song. The melodies themselves and their overall structuring, often brought into my mind specific classical composers like Modest Mussorgsky.

There are however moments when Tziallas chooses a more straight guitar approach, generating some dark and solid riffs, for specific parts of the songs.

The vocal melodies are great. I have to point that. They make the songs sounding even more adventurous.

The overall material is balancing between European and US Prog Metal of the 90s and 00s. The classical elements, the dreamy melodies and the amazing vocal performances generate a darkly beautiful musical portrait.

Many wonderful guests can be heard on the album: A female singer (Andrea Krux), a saxophonist (Hugo Lee), two more guitarists (Steelianos Amoiridis (ENEMY OF REALITY) & Stelios Anatolitis) and even a string quartet (Esession) were invited to join in and complete specific pieces of the album’s sonic puzzle.

The album was mixed by Yiannis Tziallas and John McRIS at Hell’s Kitchen Studio in Athens, Greece and was mastered by Kostas Scandalis (HORIZON’S END) at Infinity studio in Thessaloniki, Greece.

This is a magnificent journey to Dream Cycle. Get ready to live it. 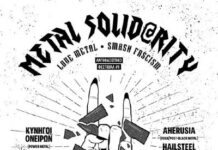