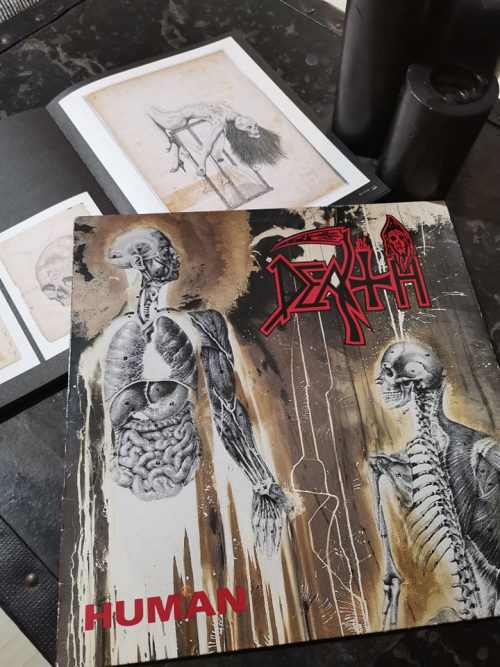 30 years exactly today for a very huge album and personally in my top 3 from the band. But let’s not hide, especially those of us who grew up in the 90s, we know that this band and this huge composer took off after his death. When Symbolic was released it was very melodic, some said, Individual… was for jazz musicians, and Human was very technical. The first three ONLY some people shouted….

They were not wrong that it was far more technical than their previous efforts but let me personally consider the first experimental Death Metal technical album to be Consuming Impulse from Pestilence since Spiritual Healing is perfect but Human came one year later to open the horizons of talented musicians firstly and later for fans ears as many of them never understood its glory. But Death knew what they were doing very well…

Starting with one of the most fantastic drum intro ever Sean Reinert enriches our brain and teaches us at the same time. His very good friend demigod Lee Harrison is still recording with a cymbal that Sean has given him as a gift. The sound continues to be heavy but now there is a balance in the music, in the ideas, in the spiritual lyrics, in the screams and the bestiality.

Suicide Machine and Di Giorgio start grabbing the strings, playing synchronously but unrelated to the guitar parts and slapping the bass in a way unprecedented for the time and the doors open wide for what we know today as technical death metal which continued by some of the greatest: Gorguts, Oppressor and Cryptopsy. (pp. Listen to the cover by the New Yorkers Malamor).

Together as One, Secret Face, See Through Dreams have nothing to envy from the ultimate Death metal album “Spiritual Healing” tracks;  just the guitars became faster and the themes more plural. Lack of Comprehesion shakes your neck …

Thriving on your cliché, Compelled by self-resentment ….

Cosmic Sea is the “Orion” of death metal and the album closes with the crabby Vacant Planets. It is really difficult to change three members of the band and especially a human metronome like Bill Andrews, but they succeeded and with the help of the members of Cynic went the death metal light years ahead. I may not have lived exactly the time it was released but a little later, still the stigma of the album will be indelible for many decades.

PS1. Modern technical bands do not know how to keep Human’s balance
PS2. The artwork covers since Human and beyond until 1995’s Symbolic are designed by Rene Miville
PS3. I do not mention RIP to Reinert and Chuck because through this album they will live forever
PS4. Stop making useless merchandise from DEATH, albums are pure gold as they are.

Archgoat: Listen to their new album ‘Worship The Eternal Darkness'