May of 1995. I was at high school during mathematics hour, (I don’t remember exactly what lesson but definitely boring as fuck). I had a cd copy of the new Deicide album in my bag and I was so fuckin’ proud about it, that I was showing it to almost all my classmates. Until one of them destroyed the moment by calling it “cool gothic cover”…that was it….both suspended for the next day…C’mon guys’ “gothic’ one of the best Death Metal covers? Anyway the specific classmate is still a friend of mine and even from the next day he understood his mistake when he heard the album at his place first thing the next morning…

“Once Upon the Cross” is the third studio album by Deicide. It was released on April 18, 1995, by Roadrunner Records. It may not be a masterpiece, by no means, but while it is an undoubtedly killer album, the main problem is that always it will be compared to its predecessors. “Deicide” & “Legion” considered being classics from the very first moment and as top sellers of the genre -that only Cannibal Corpse could challenge their numbers-, I suppose it was never easy for “Once Upon the Cross” to win Deicide fans.

Musically, “Once Upon The Cross” is a guitar driven full of pummeling drums album. But these pummeling drumming could have been even faster! Because the speed of the songs is slower in the album compared to the speed Deicide play them live. This happens because at first, the album’s length Deicide had recorded was only 22 minutes –way not enough duration for an album- so they had to play the songs slower to reach a closer to 30 minutes target. Steve Asheim said about that: “Listening back,  ’…Cross ’ seems very slow. Live we play those songs much faster. Actually we’ve always played them faster than they are on the record. When we went in the studio in ’94 and I recorded the drum tracks at the speed I had been playing them at practice, we only had 22 minutes with the same amount of songs, they were just faster. 22 minutes does not make an album so I re-recorded the songs at a more controlled pace and still only ended up with 30 minutes. So there it was.”

The sound is a rather typical coming from Morrisound Studios, definitely polished and not as raw as their 2 first efforts had and closer to heavy metal sounding. Benton uses double screams really wisely for his aggressive low pitch growling and gives extra power to the songs that are well written with provocative lyrics and short duration (no song goes over 4 minutes in length). The anti-Christian lyrics are full of hate but even though Benton wasn’t (I believe he hasn’t changed a bit) a poet or something still are not (so) naïve as lyrics in their later releases in the 00’s. As the bass follows the guitars you have to be really focused to hear it, but honestly sometimes you feel that it doesn’t exists. Asheim’s drumming is tight and Hoffman brothers guitars thick but the riffing, don’t add something spectacular on Benton’s simple song structure but unfortunately the final result is almost impressive. Probably because some songs have catchy choruses like “When Satan Rules His World” & “They Are the Children of the Underworld” that stick to your mind. Actually the riffs are too simple but yet suitable. It seems that sometimes hitting power chords and doing enough tremolo picking can be enough for creating a creepy atmosphere alongside with the Slayer soloing.

My personal favorites are: “Christ Denied”, “When Satan Rules His World” & “They Are the Children of the Underworld”.

*The samples at the beginning of the opening track “Once Upon the Cross” and “Trick or Betrayed” are taken from the film “The Last Temptation of Christ” directed by Martin Scorsese (1988). 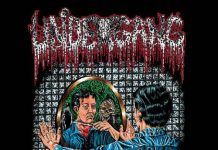