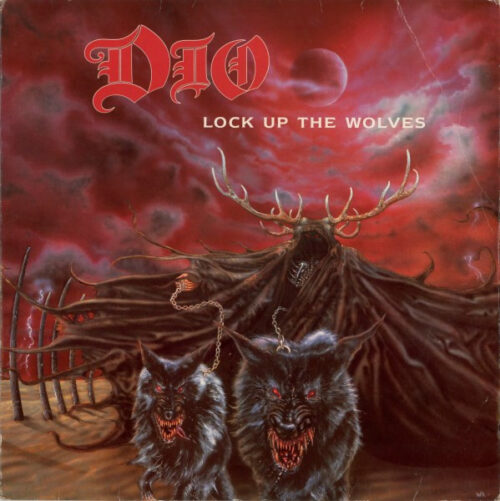 I can understand the job that a music journalist had on previous decades especially between 70’s and early 00’s. Or how important his/her opinion could have been to many or some people. But nowadays it seems rather out of place to feel his/her review to have major impact to its readers. Thankfully most of us press and audience has access to music and more information than ever before. So easily every thought or writing can be criticized too, as the reader can hear what the editor or journalist write about an album judging by his personal taste. Especially on past albums trying to display a record as a forgotten gem while it is actually weak and poor is meaningless. On the other hand showing an LP that has passed the ultimate test, the test of time as a bad moment in a band’s or an artist’s career is also without any worthy reason.

As I was reading reviews about “Lock Up The Wolves” that a friend emailed me when I told him that I was writing a few words about it I was totally shocked. Probably some people are deaf and other that follow their opinion actually blind…

“Lock Up the Wolves” is the fifth studio album by Dio, released on May 15, 1990. 1999 was a massive year for extreme sound. A plethora of now considered to be classics, albums were released on that year while everything was getting heavier, faster, more brutal and more extreme…Ronnie couldn’t let  changes throw him out of the train as he wasn’t afraid of anything; who would feel fear with such a divine voice and excellent skills after all…

Speaking of changes though Dio made many to his band’s line up to. Actually we are talking about a complete change of musician line-up over the previous “Dream Evil” album, including 18-year-old guitarist Rowan Robertson, and Simon Wright on drums that had played with AC/DC from 1983 to 1989.

All these changes were made because Ronnie was not satisfied from “Dream Evil” songs totally. He thought that the songs were unfinished and he decided to find new members and new composers to help him. After 5000 (!) demo cassettes that he heard he finally hired Robertson and continued with the rest of the band who almost everyone helped writing the album.

So the fresh breed worked pretty well on the back then new Dio’s vision in terms of the final result. Please add the new music direction that was slight bit different from its predecessors. First of all it had a young ambitious fire underneath burning as the 18 year old new guitarist took his chance and the great opportunity, one of those we call once in a life time, as Dio let him contribute in all 11 songs of the album. He also wrote and demoed another two tracks (“Hell Wouldn’t Take Her” and “The River Between Us”) that never saw the light of day as this was Dio’s wife Wendy’s decision and in 2018 Robertson mentioned the fact in an interview with (in the five-year anniversary of the passing of Ronnie James Dio) Jimmy Kay from Canada’s The Metal Voice. A small help from Jimmy Bain and Vinny Appice on few songs was welcomed of course when these two guys were still on the band, Swede keyboardist Jens Johansson (ex-Yngwie Malmsteen) co-wrote two, while New Yorker bassist Ted Cook co-wrote only one. Additionally blues elements or Deep Purple-like in the veins of  “Mistreated” song can be heard in “Evil On Queen Street” (the track that opens the B’ side of the album) that took its title from a deli in Toronto which had a sandwich with that name—per Dio on Much Music in 1990. In mid-January, the band went to Reno Nevada in United States to record their new compositions. The recordings were made at “Granny’s House Studios” with Tony Platt and Dio producing, while the audio was mixed at “Battery Studios” in London. The record was released on 15 May 1990 and Dio began their European tour opening for Metallica, while in Great Britain they toured with Trouble opening their own shows.

The result was a win for Dio artistically. Heavier guitars that added extremity but didn’t deteriorate the characteristic motif of the band. Compositions like “Lock Up The Wolves”, “Hey Angel”, “Between Two Hearts” or “Born of the Sun” could easily be on “Dream Evil” or “Sacred Heart” if not into one of his 2 first colossal records. So the opener “Wild One” which was also the first single and video had some air in radio and MTV that made the press talking about the new Vivian Campbell. Soon enough it was the same ones that were nagging about the new album and the new guitarist. As for the MTV air as long it lasted had some small success but eventually was a fiasco for Dio, which his career had definitely going down for his personal group and just before releasing their next album he returned to Black Sabbath for “Dehumanizer” in 1992.  (In the United States, the tour was called the “Throw ’em To The Wolves Tour” and on August 28, 1990, Black Sabbath bassist Geezer Butler appeared with them playing the song “Neon Knights”. After the concert they talked about a reunion of the lineup of Black Sabbath they had from 1980 to 1983, with Dio on vocals, Butler on bass and Tony Iommi on guitar. In early 1991, Dio put his personal lineup on hold to return to Black Sabbath and record “Dehumanizer”.)

But the album wasn’t bad at all. Unfortunately the era was very difficult and it was the times hard for classic sound and traditional Heavy Metal/Hard Rock as grunge was at its prime and at the same time Thrash was big, Hair Metal was sinking very low and finally Death and Black was winning the youth in both sides of Atlantic Ocean with a huge underground movement so no piece from the cake left on the plate for old dinosaurs from the 70’s, no room for commercial triumph for defenders of the faith.

The A’ side of the album had somehow more catchy songs and closer to Dio’s previous works. But B’ side was also interesting ideas and compositions even if some are slower that his usual tempos. The aforementioned “Evil On Queen Street”, “Twisted” “Walk on Water” and “Why Are They Watching Me” are brilliant tracks with melodic parts, heavy guitars and powerful vocal lines as expected.

The commercial success of “Lock Up the Wolves” was much less than that of its predecessors, mainly due to the band’s constant line-up changes which disappointed their die-hard fans. This was the band’s first album not to chart in the UK Top-20 and only reached #61 on Billboard in the United States. In Europe, its sales were particularly weak, with Germany being the only country in which it reached the top twenty albums, peaking at #16. The album was accompanied by the single “Hey Angel” which reached #94 in the UK, being the band’s last song to enter the UK charts.

Despite all the above it is an criminally underrated album from Dio that you have to add to your collection immediately!!!