Discharge from the first day they came out, they gave their own mark in the punk scene as they were one of the pioneers of the genre.

I always thought that their compositions had something of “metal” in it and generally, one can easily say that this is one of the most extreme punk bands. The new album named “End of days” serves to confirm the above.

From the first track already, one understands that the disc has a metal tone while the crust aesthetics plays a huge role creating the final result. Noisy and “dirty-played” riffs are always floating around the composition philosophy of Discharge and they obviously could not be missing here. And that’s actually the way it should be. The drums do not require any particular comment, as the Discharge Beat is an integral part of the disc, but apart from that, not few are the breaks that just are the icing on the cake.

The truth is that all of the album brings to my mind “Hear nothing, See Nothing, Say Nothing”, but just as I mentioned above, this one has a clearly more “metal” feeling. Overall, this is a very good album that does not depart from the standards of the Discharge compositions. Although, it is extremely unlikely to disappoint the friends the genre, what in my opinion is missing from the album, is the track that makes your hand to stick to the repeat button, something that was not missing from older albums of the band. 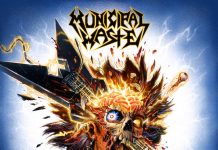