Returning to the crime scene, today we have Dødsferd, the band of the well known Wrath, who is also the owner of Fucking Your Creation Records. Today, I have for you the re-release of the album from 2018, titled “Diseased Remnants of a Dying World”, adding two new songs, from this year’s EP, “Skotos”. The release was done on tape format, in two colours, black and red, including many nice things and memorabilia from the band. Let’s dive into it…

I will begin by saying this: If some of you have never listened to this album, get ready for a nice surprise. The song that opens this album and I am referring to the song “My Father, My Wrath!”, is a lot different than what we know so far from Dødsferd and the reason is that it has clean vocals throughout the whole track and moreover it is not black metal in the way we think of a song of this genre. Yes, it is blackened, dark and with the proper doses of melancholy that this band always has, but let’s be clear. Wrath himself is pretty non-conventional and that shows in his music. For me, it is one of the best Dødsferd songs ever. So, continuing with the album and with the rest of the songs, order is restored so to speak. Roaring black metal, with razor-sharp guitars, vocals straight from the depths of a blackened soul and the rhythm section of the bass and drums, placed playing-wise where it should be. The album end at 51:44 and all the songs except the first one, are keeping the bar high as always. To be honest, I wanted to mosh and break everything at some parts of this album, because it may be black metal, but at the end of the day, it is METAL and that won’t ever change. So while the album ends, we are entering to the realm of the new EP “Skotos”, containing two songs.

“Skotos” is made of two songs, “Skotadi” and “Cursed to Die at First Light”. With clearly the best production I have ever listened to from Dødsferd so far, this EP has nothing to be jealous from released from abroad regarding the extreme metal scene in every aspect. Sound-wise, composition-wise, from everywhere I see it, it is simply remarkable. On the plus, is also that the first song has Greek lyrics, and for some reason, I always liked that in black metal.

Ending this, is will point out that this release is a must to any collector out there, as it comes in a super nice package, but apart from that, it is something that every black metal fan who knows what he wants, should have in their collection. Dødsferd is a band that have never released a just good or average album and all their releases are never less than great. Personally speaking, as a follower of the Greek extreme metal scene, I am proud to have this band’s releases in my collection and I am saying it without any remorse. Long story short, go for it! 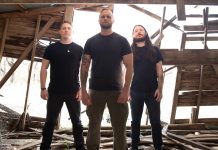