In their endless quest to push and support current underground acts that perpetuate the odor of vintage death metal, on January 24th, 2022, Memento Mori in conspiracy with Rotted Life are  proud to present Ectoplasma‘s highly anticipated fourth album, Inferna Kabbalah. Memento Mori will release the CD version while Rotted Life will handle the vinyl and cassette versions.

Hailing from Greece, the band was initiated by Giannis Grim (Carnal Dread, Humanity Zero, Death Trap, Vultur) and George Wolf (Forced In, Dismal Chant, Vultur) when Carnal Dread and Forced In shared the bill at a local show back in the grip of winter of 2012. Both musicians being real zealots of what death metal was known for back in the late ’80s and the early ’90s – in other words, no tech wankery and no crystal-clear production – they rapidly entered the studio just to start jamming, and ultimately gave birth to Ectoplasma.

Shortly after, the Everlasting Deathreign demo was discharged upon mankind, granting the band some following among diehard fans of unpolished death metal. On subsequent releases (the Spitting Coffins debut album and the split tape with Hatevomit), the band kept on perfecting their craft and obtaining more adherents of their underground creed, reaching a more mature sound by the time the Skeletal Lifeforms EP was released in late 2016 (tape format) / early 2017 (CD format), in which Ectoplasma shamelessly manifested their devotion to muddy, organic, disgusting, bone-breaking, and rotten-to-the-core DEATH METAL influenced by the early offerings of bands such as Autopsy, Baphomet, Asphyx, Morta Skuld, Grave, Demigod, Gutted, Death, and Judecca, only with their own personal twist.

With the addition of Dion K. Alastor (Vultur) on guitars and Giannis Botsis (Embrace of Thorns, Thou Art Lord) on drums, it was with 2018’s Cavern of Foul Unbeings – released to international acclaim by Memento Mori, the band’s current label home – that Ectoplasma kicked their crusade against inane, overproduced “death metal” into overdrive. Reeking of the same characteristic grime and decrepitude of that album, the band’s third, absolutely gutsfucking full-length, 2019’s White-Eyed Trance, saw Ectoplasma entering concept-album territory – but only in lyrical concept, as the musical side of the album stayed true to their their now-signature world-eating sound. Justifiably so, White-Eyed Trance reaped international acclaim as an unabashed statement of classic death metal songwriting.

Naturally, 2020 also threw the world of Ectoplasma into upheaval, as their lineup was pared back to the duo of founder Giannis Grim on vocals & bass and guitarist / drummer Dimitris Sakkas, who holds a wealth of experience in the metal underground, currently maintaining the bands Inhibitions, Humanity Zero, and Slough of Despair, among many, many others. Thankfully, the latter is a fine fit for Ectoplasma, as the resultant Inferna Kabbalah is arguably the band’s most polished and punishing record yet. It’s a curious balance – the execution sounds razor-sharp and precise when placed within such a soundfield, with the more frequent bouts of speed given extra devastation and the breakdowns even more so – but one that pays off in spades, as their songwriting continues to thrive within strictly traditional parameters, and this relative “refinement” only makes it that much more powerful. Thus, it’s not unreasonable to view Inferna Kabbalah in the same headspace as Bolt Thrower’s righteous …For Victory, except Ectoplasma surely have their own tank-treaded crush!

Delving ever deeper into the realms of horror, Ectoplasma receive yet another stunning cover art by the masterful Mörtuus. Read their Inferna Kabbalah or weap! 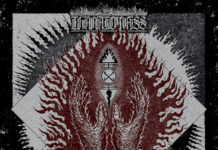