Ectoplasm (from the Greek ektos, meaning “outside”, and plasma, meaning “something formed or molded”) is a term used in spiritualism to denote a substance or spiritual energy “exteriorized” by physical mediums. So Ectoplasm is the substance that flows from ghosts / spirits and enables them to materialize and accomplish things like telekinesis. For some strange reason, ectoplasm is invisible to the naked eye but appears in photographs. Ectoplasma is an awesome band (and the only reason we haven’t covered any of their previous two albums and a few EPs and Splits is the incredible laziness of our editors) that might not look like much to the naked eye (naked eye meaning their name, or album cover), but once the cassette, vinyl or cd plays you will see the space where you’re listening to the record fill with sounds of an explosive mix of European and American death metal. Yes, the Niceans’ influences are not hidden (nor are they intended to be), but they are so well filtered and reminiscent of a more original version of Gruesome, as both outfits work with a nostalgic synthetic motif, but the Greeks have more personality in their songs. With plenty of good ideas to back their vision of a pure gloomy and stinky shoulder-worshiping and raw sound of the early 90’s, Ectoplasma attacks the listener with quick punches. The merciless banging does not stop there and the underlying scary, sick atmosphere created by the melodic slow passages acts as salt in the wounds left by the beatings. Autopsy, Morgoth, Pestilence, Dismember, Death, Malevolent Creation and B-Side movie aesthetic provide a cult feel and background to the LP, which would have been unfounded had it not been for the excellent compositional ability of Ectoplasma. Without trying to make acrobatics to stand out, they shuffle the deck and play with rhythms, solos and constant drum beats without losing substance and authenticity. Lo-fi production, old school tuning, garbage disposal vocals and slightly buried in the mix bass guitar do not deprive “White-Eyed Trance” of volume, administering a dose of stromalone capable of rotting the walls of your room from the stench… well I’m kidding your house will be fine, these guys are musicians, not contractors… 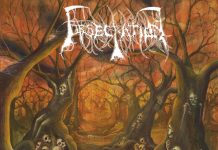