If we were leaving in a fair world then Corvus Corax should be well known in terms of publicity beyond the cult status of defenders or representatives of medieval music and should be considered at least as a mainstream folk act or something. But we are not and they are (well) known and beloved by few a strong core of die hards. Something that seems not to care a lot their founding member Castus Rabensang (Corvus Corax was formed in 1989 by Castus Rabensang, Wim (Venustus) and Meister Selbfried («Master Selfpeace») in East Germany and their name is the Latin name for the common raven) that is unstoppable when we speak about mixed genres, musicality, creativity, experimentation, thinking out of “music style boxes”, diversity and loyalty to his (music) principles (check also their side project Tanzwut). Today the band consists of 6 members: Castus Rabensang («Castus Ravensong») –vocals, folk instruments-, Xandru –folk instruments-, Norri (formerly known as Harmann der Drescher) -drums-, Hatz («hunt») -percussion-, Micha –citole-, and Aldo -folk instruments-. In their latest work, that was out on summer 2022 via The Circle Music, entitled “Era Metallum”, we are dealing, as the title reveals, with a heavy metal influenced record that captures the Viking/Folk aura of modern metal scene which inspires the new look on some old ideas of the band (in the near past Corvus Corax have a cover of “Twilight Of The Thunder God”, from Amon Amarth). Most songs of course are new compositions. Except for «Vikingar», so actually the songs aren’t entirely new, because they’re a kind of new editions of the Nordic album trilogy. In order to enforce the new recordings wisely Corvus Corax asked their friends to help the recordings and there’s a plethora of guest musicians in seven tracks in “Era Metallum” featuring as special guests:  Hansi Kürsch (Blind Guardian), Doro Pesch, Alan Averill (Primordial), Sabina Classen (Holy Moses), Kärtsy Hatakka (Waltari), Arndis Halla, Philipp Bischoff (Damnation Defaced), Bill Gould (Faith No More) and Sonia Anubis (Cobra Spell). The final result is a winner, an epic crescendo of greatness, making us wonder if Vikings had invented electricity (therefore electric guitars) how far would their hymns sound from the brilliant guitar riffs by Sami Yli-Sirniö (Kreator, Waltari) along with the progressive tempo of the huge drums and the self-made bagpipes that combine an excellent hybrid of traditional instruments and Heavy Metal song structure and performance. Please add the marvelous cover artwork by Andreas Marschall (legendary cover artist for Sodom, Helloween, Kreator, Destruction, Blind Guardian, Running Wild and many more) to complete the picture of a unique release that will enrich your discotheque. 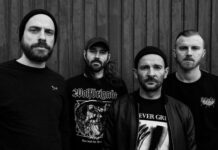