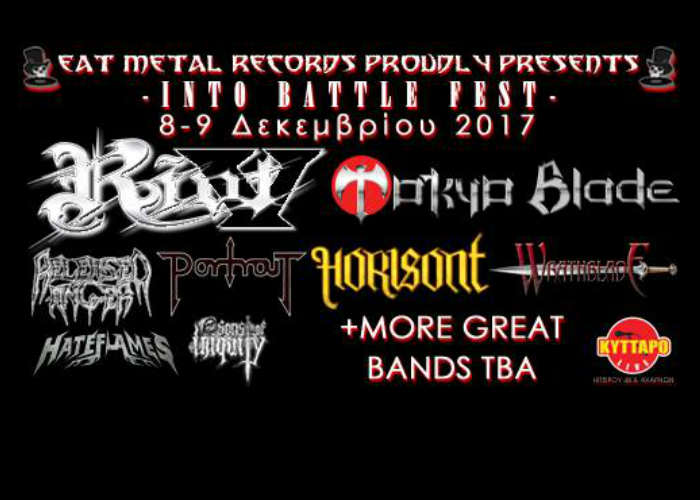 A new metal festival, followed by Eat Metal spirit and standards.
2 nights of metal magic, by bands that matter!
No fillers accepted! here to rock, here to stay..

RIOT V ( U.S.A.)
Proved to be worthy of their inheritance, we could not but welcome back a band that has a lot more to offer!
Expect a performance out of this universe!

TOKYO BLADE ( U.K.)
Followed for the first time by the original singer Alan Marsh, we hail back in our city, some of the most anthemic metal tunes ever, by some really amazing people!

PORTRAIT ( SWE )
Swedish heavy metal force, back in Greece, with a new album that really deserves the fuzz and the craving reviews!

WRATHBLADE ( GR )
Eat metal pride, with a new album to be released on this very same day!

RELEASED ANGER ( GR )
New album will be released on this day as well! Amazing thrash metal, from a group that kicks ass on stage!

SONS OF INIQUITY ( GR )
Furious metal mayhem, from a newcomer that released a demo/7″single and were hailed by the whole underground community!

HATEFLAMES ( GR )
A new metal sensation from Athens,
we expect a lot from these guys in the future!

Presale will start on 1st of September, get them from:
Sirens, Metal Era, No Remorse and Eat Metal.

More info on each day line up, and running order will be announced very soon!