KONQUEST is a brand new name on the Heavy Metal map, but surely worth remembering. These days United States seems to be number one when it comes to Epic Metal, and names such as VISIGOTH or ETERNAL CHAMPION electrify the old school headbangers around the globe. But it doesn’t mean that the old continent has nothing to say.

KONQUEST was founded in Prato in Italy in early 2020. What started as a solo project of Alex Rossi – who not only wrote all the music and lyrics, but also recorded all tracks on the debut album – quickly turned into regular band, ready to conquer the stages, and give fans what they love the most. Pure, epic and old school Heavy Metal!

Their debut album entitled “The Night Goes On”, has been produced by Alex Rossi, and got mastering treatment by the Heavy Metal veteran Bart Gabriel (CIRITH UNGOL, PAGAN ALTAR, SORTILEGE). It includes 8 songs, that follow the glorious tradition of acts such as HEAVY LOAD and THIN LIZZY, but also more obscure NWOBHM acts.

Listen to «The Night Goes On»: 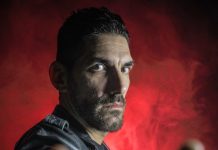