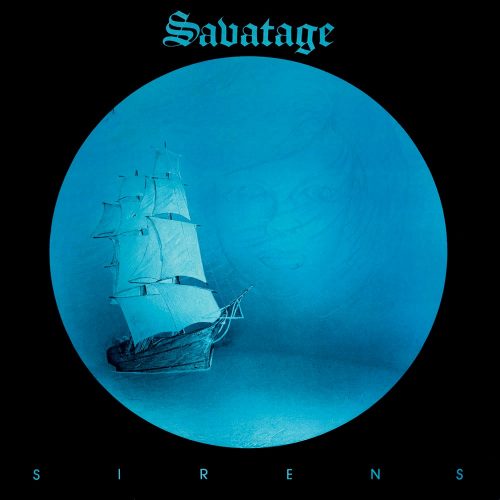 People often judge too easily, giving names to other people, to things, to ideas, to works of art, to whatever you have in mind, thinking it twice. Things that look simple or not too complicated are considered to be of less importance. As if a labyrinth or a maze is so charming for their standards and every other straight road choice is showing a lack of experience, wisdom, or judgment for them or just being for fools. It seems to me like the story with the two guys fighting and on the right side the one is doing his things with capoeira dancing or karate moves without any reason just for the sake of posing and the left side guy just using his fist and with only one or two punches giving a nice lesson to the fancy fighter.

“Sirens” is one of these cases where the catalogue of a band developed and evolved to something different and richer in terms of song structure or music direction or even in production or engineering matters and many believe that its simplicity makes it not a highlight on their career.

Back in 1982 an American band featuring a bunch of teenagers called Avatar made their first three-track EP, “City Beneath the Surface”. Soon they were forced to change their name and guitarist Criss Oliva’s girlfriend came up with Savatage. The very next year they released their debut album entitled Sirens, and things like “is this too simple for assholes forty years from now?” wasn’t in their minds, neither they understood that they were writing History…

And History can be written in only 24 hours. This was the time that Savatage needed to record and mix 15 songs that would split to fit in their debut LP and the EP «The Dungeons Are Calling» that would see the light of day a year later in 1984. Wisely Heraclitus quoted that “war is the father of all” and British claimed that “necessity” is the mother of invention, while Savatage learned very well that poverty can speed up things too, because this was the only reason why brothers Oliva along with Keith Collins and Steve Wacholz recorded both their works in such a little time, as they had money for only one day for the studio.

The pressure of time helped Savatage to have this hungry, raw, primal and brutal in its way sound. This recording also marked the first appearance of Criss Oliva and his brilliant talent. The emotional playing, the fills, the twists and most above the riffs and solos that took the world by hello. He was not only a great musician but also an excellent composer.

Heavily influenced by the classics UFO, Rainbow, Deep Purple and specifically by Ritchie Blackmore and Uriah Heep’s Mick Box he was keeping an eye open to NWOBHM and bands like Angel Witch, Samson and Venom as long as to Motörhead and Accept too.

The recordings were damn fast, as in one day they played the songs in a row as if they were on stage during a live set. Then they added the solos and afterwards Jon recorded the vocal lines. The fast takes demanded the band to be on hyperactive mood and this was reflected on the final result.

Jon delivered perfectly his lines while his enthusiasm for being in the studio was enough next to his skills in order to create a massive performance. The rhythm section; drummer Steve Wacholz and bass player Keith Collins is tight and solid. Especially Keith Collins  plays a major part is many songs. The songs were written in a four-five months period before the recordings from the Oliva brothers during a time when they were living together. They worked on the songs and demoed them and a couple of days before entering the studio still some songs were uncompleted. So they listened again the tapes and worked hard on finishing them. Rage Living For The Night and I Believe were done a couple of days before they entered the studios in Florida.  Please add that the lyrics were also written in a fast track mode when Jon had to write them as soon as possible too. He spend almost 3 weeks on trying to focus on what he should write about and then spend a lot of time in the library reading books about Greek mythology, horror stories, psychology, nightmares  or other issues he found interesting to deal with. So we back to the start and the quote about the mother of invention…

The demo feeling gives this raw and full of excitement breed to the album. And this freshness and hunger for metal and success can’t be beaten even after 38 years or the later rich productions the band could afford.All songs have this live feeling as if they are written to be performed in arenas making crowd gone wild, screaming and air-guitaring like horny teenagers and the instrumentation is just flawless. “Sirens” is an instant classic with great riff and a must for their live set lists for years. “Holocaust” is another riff driven classic. “I Believe” follows the exact same path: excellent solos, brilliant riff, and catchy chorus, despite the slow start with the acoustic guitars. No fillers here as the next two songs , the speedy “Rage”, and the groovy with creepy lyrics «On the Run» are typical 80’s tracks that maybe are not masterpieces, but they can make your head bang and stick to your mind before “Twisted Little Sister” and its (funny) sexual lyrics which seems a simple song but it is quite interesting. “Living For The Night” that follows is a highlight with excellent drumming and sharp riffs/melodic guitars that lead to “Scream Murder” that is based on Jon Oliva’s varied vocal performance that will be a trademark of the band’s sound with its madman’s screams, blended with his distinctive harsh yet melodic vocals.These two last songs could have been written/performed by Armored Saint too, and sound extremely perfect again, just like in “Sirens”. The closer “Out On The Streets”, is like a forerunner of Savatage’s future as it is the first ballad that the band delivered and probably their weakest one. Still a great song, with full of emotions guitar solo, but the band’s later efforts in the same ballad motif unveiled its poor production that worked for the “fast” or up-tempo tracks but couldn’t help a slower composition to shine.

Savatage were really great before the symphonic parts, before the concept albums or the hit singles. Savatage were great, important and huge without having a deal with Metal Blade or Megaforce and Q Prime as their managers. They were huge from day one, and “Sirens” will always be here to justify it.

Originally released on April 11, 1983 via Par Records in the States and on November 1, 1983 in U.K. through Music for Nations, “Sirens” was out in Europe via Roadrunner.  It was recorded in January 1983, in famous Morrisound Studios in Tampa, Florida, U.S.A. with Danny Johnson on the production.

The cover of the English versions published by both Music for Nations and Combat Records in 1985 used the cover of the children’s book The Borribles Go for Broke. It was also used by Metal Blade Records for the first edition on CD and other subsequent versions.