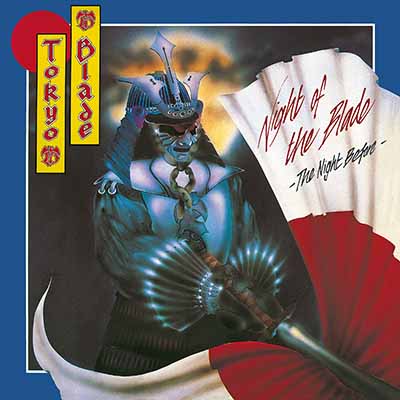 Tokyo Blade was one the most popular and well known bands (as a moniker) coming from the British shores. Ok, no platinum or golden records here or sold out arenas all over the world as Wiltshire’s N.W.O.B.H.M. group had a much different course from Def Leppard or Iron Maiden. Still they have offered some really great albums all these years that they are in music industry (you should check besides the first 2 classics also 1985’s “Blackhearts & Jaded Spades”, 1987’s “Ain’t Misbehavin’” and 2011’s “Thousand Men Strong”). But their beginning even though it was not easy, it was much more hopeful and their potential have given some great expectations for them. They started as White Diamond (1979-1980), then Killer (1980-1981) and then Genghis Khan (1981-1983 under which name they recorded a privately pressed double 7” single in 1983). With a lineup featuring: AlanMarsh (vocals), John Wiggins (guitar), Andy Boulton (guitar), Andy Robbins (bass) and Steve Pierce (drums) they finally end up as Tokyo Blade in 1983 and were close enough to become the next big thing of the genre, the mythical New Wave Of British Heavy Metal. Tokyo Blade having in their arsenal a 7” that became an instant classic 1983’s “If Heaven Is Hell” and as their self-titled debut full length album, originally released via Powerstation Records also in 1983, was a big success, everyone -Press and audience- expecting their next step. Unfortunately during the recordings of their sophomore studio album their label demanded that they should split their ways with their original singer Alan Marsh. Despite the fact that everyone in the band were not agreed with the label’s decision Marsh he quits the band without wanted to give any chance of continuing with the rest ones. So the name of Vic Wright came up to Tokyo Blade and into our lives. As the band had already finished the recordings of the album, what we are dealing here on “Night Of The Blade… The Night Before” is the original version with AlanMarsh on vocals. Truth be told “Night of The Blade” that came out a couple of months later in 1984 wasn’t re-recorded, but only Marsch’s vocals were replaced. And beyond that Marsch’s voice can be heard as backing vocals while some of his lead vocals were also kept here and there (Marsh’s backing vocals remain on the album except on “Lightning Strikes» and «Rock Me to the Limit», which were recorded after Wright joined the band). High Rollers’ version was mastered for vinyl by Patrick W. Engel at TEMPLE OF DISHARMONY in September 2020. Cutting by SST Germany on Neumann machines for optimal quality on all levels. Whoever digs high quality Heavy Metal or searching for answers on how would Tokyo Blade sound without their label messing around, this album is a nice proposition. Please don’t forget that is a NWOBHM jewel that aspects songs-diamonds like “Night of the Blade”, “Warrior of the Rising Sun”, “Love Struck” and “Unleash the Beast”. This version has a different order in track listing presenting six out of eight that appear also in “Night Of The Blade” LP plus “Madame Guillotine”, “Breakout”, “Fever” and “ Attack Attack”, that we can only find here. I guess the first edition that came out in 1998 via Zoom Club Records (that also featured 6 bonus unreleased material with Marsch on vocals) is for many years sold out, so here’s a great chance on buying an alternate version of a classic N.W.O.B.H.M. album, in a precious collection with historical value.

At The Gates Release New Music Video for «Cosmic Pessimism»