The season started off in the best possible way yesterday (6/11) at Eightball Club. Four of the most promising Greek bands (Embrace the Paradox, In Search of Atlantis, Blackryse, Destiny Default), came, demolished and departed.

Despite the fact that the underground live shows are usually poorly attended, yesterday the crowd from Thessaloniki proved that it knows how to support all the decent productions, since it arrived early at the venue and watched the whole gig from start to finish (we didn’t witness the usual bad habit of turning the back on the opening bands).

The doors opened on 20:30 and, without any significant delay, the show started to roll. First band on scene was Destiny Default from Larisa. What a fantastic kick off for the show and performance from the band! They filled the whole stage with their presence and with their sound, with their amazing guitars and the devastating drummer, while the frontman seemed ecstatic while performing. The crowd followed their lead and was apparently satisfied, as it granted the band with a vivid applause. They gave us with only nice memories of their appearance and we have a feeling that there is more yet to come by Destiny Default. They seem to be more than “just another band”. Next in line, Blackryse, the “juniors” of the bill, or so they looked like in my eyes. They presented a quite fast metalcore with nice melodic parts and rhythms that got everybody moving. They seem like they master the art of interaction with the crowd, which rewarded them for their effort. The torch was passed on to In Search of Atlantis, who started spinning around on the stage, failing to remain still even for a second. Immense energy, enthralling mood and great feedback from their fans. Despite that they had to stop playing for a while due to drum set problems, this setback did not have any negative affect neither on the band nor the crowd. I’m sure that this little technical problem will be easily forgotten, due to the band’s professional performance. The gig ended with the appearance of Embrace the Paradox. What can we say about the band’s performance, which was flawless? For their stage presence, which was explosive and they seemed like they lived every second to the max? For collaborating onstage with the vocalist of Morphinject or for their gesture to invite the whole crowd onstage in order to close the set? Every way to look at it, the band did an excellent job. I wish we could attend to such gigs more often.

This was overall an ideal concert and a solid production by Straight From The Heart Records, which also performed a draw for various gifts for the fans and handed out hats, while at the same time all the bands were exquisite, leaving us under the impression that they are on the right path to success. Don’t miss them out, if you get the chance! Cheers! 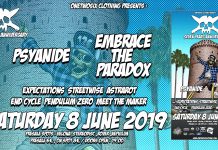