INFORMATION: Endzeit was conceived in late 2012 when their one and only release “Years of Hunger” EP was written but it was recorded in 2014. Polaris (main member) decided to create a project with the aim to spread pure black metal, so for this purpose, he had chosen the name “Endzeit”. This choice wasn’t “a shot in the dark” but expresses the feelings of the band. Actually, the meaning of the name, Endzeit, is “apocalypse” or it’s like the “end-time” in a more literally explanation. Polaris, himself, talked about the whole concept of the band and this EP, in an interview, saying that “The name, music and lyrics are inspired by the decay I saw when I visited Detroit in early 2013. It deeply moved me to see how capitalism has failed, how people live in the rubble of burnt down buildings, how anarchic structures – no, that’s not a contradiction – have found their way into the lives of people”.

Polaris is the first guitarist and, also, the rest crew are Schwarz, who took over vocals and second guitars earlier this year, Pyry on bass and, finally, Samuli is responsible for drums duties. Lyrically, they deal with the decay of life and happiness, with the absence of future in a post-apocalyptic world and, also, with some religious context such as godless narrative.

“YEARS OF HUNGER”: This EP is consisted of five songs of 22:19 minutes total time. Endzeit describe the music of EP as a “raw apocalyptic black metal”. As Polaris has, already, mentioned, the word “raw” is referred to the sound and the word “apocalyptic” is referred to the content. More specifically, Endzeit know very well how to play diabolical riffs and how to combine them with the demonic drums. They don’t get bored since they lead the listener to different paths that they want to follow. The slithering/passing from the slowest to the fastest rhythms are so pure and well-hearing and, of course, the most of them accompanied with the most appropriate black metal screams. Nevetheless, these changes, sometimes, exist without making any sense. Moreover, there are some parts in which “back orchestral vocals”, in the way of synth sounds, create a very atmospheric and chaotic sense where the combination with the rest sounds/music makes a forceful composition (“Life?”).

IN CONCLUSION/GENERALLY: Anyone can notice some influences from bands such as Dark Funeral (there are a lot of them), Marduk and Dimmu Borgir. This is quite easy to understand from the way they play a version of “The dawn no more rises”, in which you have the sense that Dark Funeral are guests in this EP. Endzeit have all the main characteristics to “follow the road” to black metal but they have to work harder to differentiate from the others. They can do this because they have the feeling to do this. During this period of time, they work on new songs; they work on black metal, so a new recording is going to release. 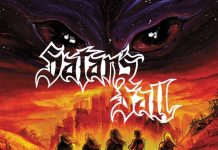