Thirteen years after the release of their debut album, “Bringer Of The Fall”, Eternity have made their comeback with the release of their second full album, entitled “To Become The Great Beast”. Essentially it is the combination of their two demos “In Subspecies Aeterna” and “To Become the Great Beast” released in 2003 and 2005 respectively with the single “Te Nostro Deum Sathanas” of 2019. For those who are not familiar with the band and their efforts, let’s begin with saying that the record follows the typical Black Metal mentality, as it lyrically and aesthetically embraces the satanic path, with all the darkness surrounding it, the theme of inevitable death, and so on. Evighet, the mastermind behind Eternity, described “To Become the Great Beast” as his attempt to create the “ultimate” Black Metal album, however, especially in terms of structures and overall composition, I wouldn’t say that. Certainly on the positive side of the scale we have heavy and quite aggressive riffs, with many tremolos and thrashy outbursts accompanied by rough vocals and constant pummeling on drums. In general, what I am describing sounds good, right? Yes. But what would your thoughts be if I told you that every single one of the tracks included in here share the same structures and follow the same sequence? Not so good after all, huh? If it’s the first time listening to the album, everything will sound ok; however a few listening sessions later the magic is gone. I get it, the compositions come from the past decade, but that does not justify anything. As a positive point, just to stop slating the album, I should mention the fact that the record has stellar guests, such as Blasphemer (Aura Noir, Vltimas, ex-Mayhem) on bass, Brynjard Tristan (ex-Dimmu Borgir, ex-Old Man’s Child) on vocals, as well members from Nocturnal Breed, such as V. Fineideath and Tex Terror. “To Become The Great Beast” was released in CD, vinyl and digital format. 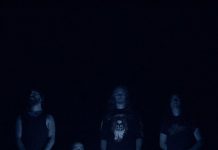 Falls Of Rauros: Listen to the new song ‘Clarity'