No, the heaviest album of the first half of the 80’s doesn’t celebrate any fancy anniversary. Neither no member from the recording line-up has died today nor is it his birthday. So why do we post this article anyway? ‘Cause we can…And because Heavy Metal Maniac is a lot more than just another LP.

Even though it was originally recorded as a demo, finally their label decided, due to its quality that it was way too good, to release it as a studio full length. And they decided so wisely after all. As the record is a monument of roughness and vagabondage. High influenced by Judas Priest, Motorhead and punk of its time, Heavy Metal Maniac sounds like Priest circa 1980-82 after heavy lifting in the gym, drinking a gallon of kerosene and visiting the neighbor holding a crowbar in their hands…There’s no reason for a track-by-track reference or something.  It is considered one of the cornerstones of speed metal, it was, still is and will always be a source of inspiration for the later thrashers and it enjoys special respect among all metalheads. 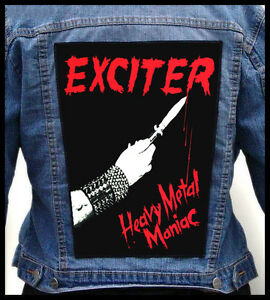 I should just focus on the song with the same title, that when you hear it, is like a bus hitting your face… after it falls from the 13 floor…Iron Dogs’ riff is clearly the heaviest thing we’ve heard until 1985, and there’s no way the closing “anti – solo” of Τhe Cry Of The Banshee wasn’t digested by the 90’s Βlack Metal fanatics. Keep in mind that when the masterpiece Violence And Force was released the following year, a portion of their fans turned their backs because, while it had a very good heavy metal production, the sound was not as barbaric as in Heavy Metal Maniac.

You should definitely check out Heavy Metal Maniac, Violence And Force, Kill After Kill, Dark Command (their “darkest” moment) and songs like Death Revenge, Riders Of Darkness, Feel the Knife. These are truly seminars on aggressive and vulgar Heavy Metal.