Remember the lyrics on Judas Priest’s song ‘You don’t have to be old to be Wise’ taken from their 1980’s mega album ‘British Steel’: “I’ve had enough of being programmed/And told what I ought to do… I grow sick and tired of the same old lies… ”. Well, Greek death metallers Freefall take this issue from the opposite sight: Getting older doesn’t mean you will turn wiser… as their new 3+1 songs effort reflect the constant struggle of getting older yet not wiser, in a world on a free fall into obscurity. Their new ‘Ep entitled ‘Dead Is The Oldest You Can Get’ comes shortly after the band finally stabilize its lineup. Their sound now is more solid, more confident and balances perfectly between old-school European and American death metal scenes, yet it emerges modern extreme metal elements. The cover on Killing Joke’s ‘Complications’ is awesome, while their 3 own compositions have a punkish attitude and an in your face approaching giving extra ferocity and aggressiveness to the ‘Ep. If I want to focus on something is the stellar production that stands against the modern way that metal albums are recorded. The production is totally raw, meaning by that, that it has a “human” pulse as it breaths and it doesn’t sound too polished or too sterilized. ‘Dead Is The Oldest You Can Get’ was recorded in the blink of an eye during a weekend at Blueberry Production Co. with Kostas Kofinas on the wheel. Mix and master took place on the same studio a couple of months later. The cover is a drawing of the Greek painter/tattoo artist Christos Voulgarakis. Artwork was conceptualized by Nikos Tsiolis Artworks (Dead Congregation, Hail Spirit Noir, Agnes Vein, Kemerov). Photos were taken by Vaggelis Neofotistos (Hail Spirit Noir, Agnes Vein, Concrete Bastards). 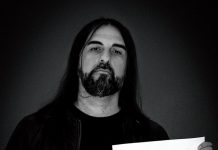