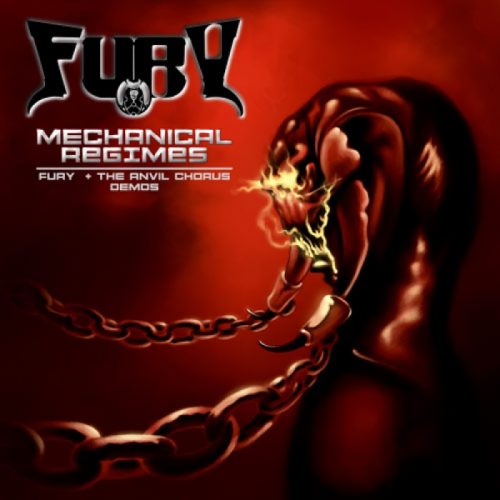 Michigan is known as The Great Lakes State or The Wolverine State and is well known for the major automobile companies, its famous university and Detroit Pistons. In music industry not everyone knows that The White Stripes, Eminem and Kid Rock come from there, still they are the most recognizable names in our days as Motown is a glorious part of its past, but it seems that as we speak for the 20’s it is a name that fits only to the Rhythm & Blues Hall of Fame (after all Motown left Detroit in 1967). If we speak about extreme sound, Michigan is also home to the post-hardcore/punk-rock, but if we speak about metal you probably know Acid Witch, Halloween (you know the ones with the cult classic “Don’t Metal With Evil”), Battlecross, The Black Dahlia Murder, and definitely I have to mention the proto-punk pioneers Death! Fury is an excellent example of how five youngsters can create a quality band, deeply inspired by their music heroes. With the help of drummer and founding member Ronnie Lee Pasquale, Lost Realm managed to collect 11 songs which explore the band’s six years of activity both under the Fury moniker and later as The Anvil Chorus. Entitled “Mechanical Regimes” is actually a collection of over 50 minutes of quality U.S. Prog Power, highly recommended for fans of the Fates Warning. Fury established in 1990 in DeWitt, Michigan, with Ronnie Lee ‘Graham’ Pasquale (drums) and Vince ‘Lacross’ Foster (guitar), writing the Fury cassette EP. By 1991 Voltaire Andrews (vocals), Curtis Sorell (guitar) and Matt Dexter (bass) joined the band. Fury practiced in Battle Creek, Michigan, 7 days a week, getting tight enough and started playing live shows where they tried to dominate their area. Soon enough they got to the studio to record the “Fury EP” in Napoleon, Ohio in fact at the age of graduating high school, and released it in 1993. It was that time when their manager decided to move the band to Phoenix, Arizona. This was by the end of ’93. They played some gigs everywhere in Phoenix, opening with their heroes Fates Warning, Dream Theater, Megadeth and many more. For the next two years the band palyed almost in every possible place in Arizona but success wouldn’t hit their doors. By 1995 they had changed their name to The Anvil Chorus, done some lineup changes, too as they changed bass players, added keyboards and continued with a new name and new bassist until 1998. By 1999 Ronnie, Curtis and Vince started Sin Theorem back in Michigan, where Ronnie had three different lineups until 2013. Curtis Sorell passed away in 2007. Vince lives in the Philippines. Voltaire lives in Florida, Matt stayed and still lives in Phoenix. Ronnie is still playing and touring in his Death Metal/ Deathcore Detroit band, Forces. Lost Realm’s album includes Fury’s: “Send Me Your God”, “Crush”, “Mechanical Regime”, “Questions Of Fate”, “Fury” and The Anvil Chorus 1995’s songs: “When I Sleep”, “Rage”, “Infatuation”, “Come Take Me Home” and “Foundations” in a CD edition limited to 300 hand-numbered copies, including band biography, song lyrics and band photos, with the dynamic mastering conducted by Bart Gabriel. Fury had the quality to stand in high level and becoming a bigger name. Their singer Voltaire Andrews had a sweet and warm voice bringing in mind the great Ray Alder. The song writing was tight and solid, based on melodic structures and progressive touches here and there, while the guitars were strong enough when it was necessary. It may not be a must buy release but it is decent and worth exploring especially if you are a Fates Warning devotee, even though Fury isn’t definitely a clone of them, and I mean that folks!