Ten years. Ten fucking years took them to pull the trigger. Now, the gun is fully loaded on constant discharge. I’m talking about Gadget, who released “The Great Destroyer” and caused our jaws to drop to the ground! Grindcore with metal elements, probably the best there is in the current field. Gadget were formed in 1997 and since then they’ve released quite a few albums, however all of them are notable and besides that, Gadget is a band that has influenced so many others.

In their third full length record, the band follows the usual Gadget course, as was paved in ‘Remote’ and ‘The Funeral March’ with a flawless production, handled by William, the band’s drummer. The compositions have much to say, they’re not boring or repeating themselves and the speed is stuck at 666bpm. There are some mid tempos that crush your bones, as always, the vocals are fierce and violent, as is the rest of the effort. Some death metal elements are scattered here and there, marching on the Swedish school and giving a “heavy” aesthetic that I was attracted to. Seventeen tracks, with Mark “Barney” Greenway (no introductions needed) on guest duties, while the albums cover is different from what we are used to.

The album was released by Relapse records on cd and vinyl in a limited number. In short, we are talking about an aggressive and very well worked dynamite holding a high level in the grindcore scene which especially nowadays vomits endless bands. The Swedes’ game is of another level, therefore they deserve our tremendous support! For me it is definitely on of the best releases of 2016. Blackened deathly flags of hate! 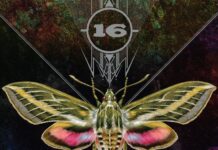