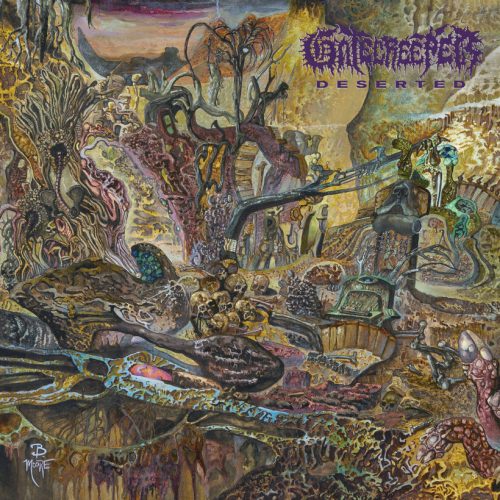 Three years after their brutal welcoming to their dystopian universe with the glorious debut, Gatecreeper return with another album once again on Relapse Records. Death metal devotees know that these Arizona fellas can unite a plethora of diverted audiences as they manage to filter their influences that come from an ocean of sounds and deliver a final result that can please anyone that is searching for a promiscuous album. Don’t forget that their vocalist Chase H. Mason sings also for doom/heavy metal heroes Spirit Adrift (as also their guitar duo, Eric Wagner and Nate Garrett a.k.a. Jack Maniacky here), something that proves my sayings about their influences and their rich music background. Tardy brothers can be proud for the sons, as Gatecreeper have Obituary as a polestar, (so we can include Celtic Frost too as their fathers), therefore death metal is blended so perfectly with hardcore, but not only with hardcore. First things first. Obituary are not their only power of suggestion. Agnostic Front, Asphyx, Bolt Thrower, Grave, Dismember and Entombed from the classic ones, but also bring in mind in a healthy way newer bands like Hooded Menace or Black Breath. Actually there’s a global underground featuring band like Tomb Mold, Witch Vomit, Ossuarium, Mammoth Grinder, Vastum and many more that is ready to explode and make Death Metal Great again (duuuh)…and Gatecreeper will be one of the leaders not the followers of that movement, believe me. Back on the album, old-school death metal may be the base, but Gatecreeper are bold enough to push it further. Gloomy themes, few but memorable raunchy riffs in the linear structure are enlisted, sepulchral howls, growls and roaring, tight songwriting and slower tempos than its predecessor are conscripted in order to achieve this. Do you need Pitchfork to tell you which Death Metal band is killer enough for you? Do you need hipsters to make a savage underground metal band commercially successful or to tell you why HM-2 pedal is the best thing that humanity ever invented? Check “Deserted”, “From The Ashes”, “Everlasting”, “Boiled Over” and ”Barbaric Pleasures”.