Ghost are having a feast. And so are we, along with them. It has already been 10 years and 4 studio albums until they finally release their first live album. 2008 looks so far away and their hometown, Linkoping looks so small in contrast to their huge name. The term “classic heavy metal with melodic elements, along with psychedelic 60’s rock” looks so restrictive to describe Ghost. Actually, no its not, at all, but “Evil Pop” fits way better.

Anyways, one of the most successful European bands of the ’10s are finally releasing a live album, giving us a reason to fight or have a (polite?) conversation whether if they are metal or not, among other stereotypical bullshit people have been talking for them. What are the ingredients to a successful live album? It has to include all the fans favorites, along with a couple of underrated gems the band sometimes play live. It has to sound fresh and renewed for the listerner, the fan and the consumer. Ghost have released many hit singles (I don’t have to mention them specifically, each one of them kicks your ass). They are in a good mood, while Papa Emeritus is stronger (and lonelier) than ever. There’s a beautiful flow of songs in it, no irritating pauses, something that makes the audience a little more bonded with their sound than usual. The guitars however should have a higher volume to reach the high volume (in my opinion) of the vocals. The artwork is once again fascinating and a great reminder of their latest studio album “Meliora”. It was recorded during their Popestar tour in San Fransisco and makes my anticipation for the new studio album high and my expectations higher, mr. Forge… 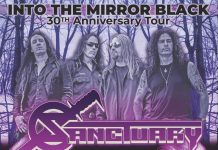