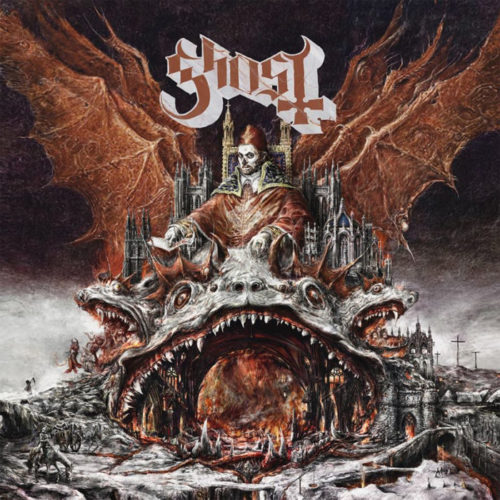 ‘Once you ‘got’ Pop, you could never see a sign again the same way again. And once you thought Pop, you could never see America the same way again.’ One of the famous quotes from Andy Warhol is a phrase that sums up everything about the Ghost-world and its paraphernalia. I just can’t understand anyone that just woke up from a coma (..I guess) and realized that Ghost’s sound is closer to (evil) pop than Hard Rock/Heavy Metal. But we didn’t have to wait to see the Thriller-inspired theatrical moves or Rats video to see the pop way that ghost treat their music. As I also know that metalheads appreciate quality music beyond genres and are proud for their record collection that ranges from crust punk to AOR and everything in between. On their fourth album, Prequelle, tasteful simplicity, which is never really simple at all, proved to be the right course for Tobias Forge to follow once again. The Blue Oyster Cult elements are now a (still) loud minority and the occult rock parts are lesser than ever. Only the first part of the album (or the A’ side for old school rockers) has guitars worth to mention as the B’ side is getting more atmospheric and piano driven if I can use such a term. Their instrumentation is seminar and the multiple levels of orchestration give a rich result. Guilty pleasure or not Prequelle has a unique character and a dark sense of humor as lyrically is speaking about Black Plague. A not so common theme to deal with, but Ghost are not of course an average Joe’s band… and the cynical way to approach such a strong issue that caused the elimination of 1/3 nearly one-third of the then European population during the Middle Ages (14th century) shows a lot about their  mentality. Probably their goal is to be the next Arena Rock band. They don’t have to mature. They don’t need to evolve. They just keep it goin’. David Lee Roth in Rolling Stone back in 1978, 40 years ago, advised the masses and without knowing it, Ghost too: ‘…I don’t like the word evolving, or any of that bullshit. The idea is to keep it as simplistic, as innocent, as unassuming and as stupid as possible”. And as pop as possible too Mr. Forge…