Ready for day 2?! As usual, additional reviews by Grimm Gent. All pictures belong to Graspop Metal Meeting and the respective photographers. Click on a band’s name to see their setlist.

I planned to have a busy day today as some of my favorite bands were shining on today’s line-up. Semi-rested from taking it easy last night I shuffled into the Metaldome to watch the symphonic black metal band CARACH ANGREN. With only three members on stage the Dutchies managed to provide quite a rich sound and their ghost stories accompanied by live violin proved entertaining on this early hour. 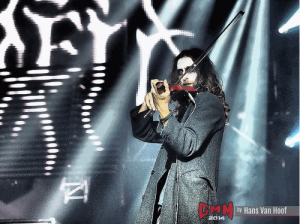 IN SOLITUDE struggled with the now familiar problem of noise from the Mainstage as their set coincided with DAGOBA’s. After trying to listen to the heavy metal of the former, I gave in to the pull of the Mainstage and checked out the latter’s groovy metalcore on the larger stage. Better to see one show with good sound than listen to a mash-up of both. The French had attracted quite some people in front of the stage already and threw down an energetic show, ready to wake up the crowd at the hour of noon. Also their newer material sounded fresh and powerful. This band is growing and worth keeping an eye out for!

I left the bigger crowds behind me to check out SKYHARBOR, a progressive djent metal band all the way from India with the familiar face of Dan Tompkins of TESSERACT. Probably the most exotic band of this year’s Graspop they managed to attract a small crowd at the Jupiler stage. Their easy listening music with a cold Jupiler beer in the hand was perfect to prepare for what’s to come next.

Just like SABATON, POWERWOLF is another power metal band that gets his fan base mainly through their catchy choruses and comical religious themes. The crowd shouts along wildly with ‘Amen & Attack’, ‘Ressurection by Erection’ and ‘We Drink Your Blood’. They managed to shake up the last remaining sleepy heads on the field.

We already had some violin live on stage during CARACH ANGREN, but SKILLET pushed it a little bit further by bringing in a violin and cello on stage during some of their songs. The contrast with the static symphonic black metal is quite large as the artists combine their playing with hyperactive dances reminiscent of YouTube violin-phenomenon Lindsey Stirling. It’s not often that an American Christian metal band makes it way all the way to Graspop. The electronic influences in the music mostly appealed to the younger people in the audience while I enjoyed their older straightforward songs like ‘Whispers in the Dark’ and ‘Comatose’. Main thing I remember is the red-haired drummer Jen Ledger who laid down amazing backing vocals while beating away on the drums. A pleasure to behold for both eyes and ears.

Due to a late line-up switch I manage to watch ENSLAVED live for the first time. I arrive late in a packed Metaldome and am forced to watch from a distance. Mostly familiar with the band’s older work, the show is different than what I expected. The Norwegians’ music is drenched with their progressive Viking atmosphere. Definitely not bad, just different from the expectations. Larsen and Kjellson’s vocals contrast each other amazingly live. This band was worthy of a bigger stage than the packed Metaldome.

And then the moment has arrived to unleash all that energy saved. GOJIRA climbs the Mainstage and they plan to make Graspop tremble. The drizzle that falls from the sky does not bother me at moments like this, much less than the sound quality which is not perfect. Usually I only venture close to bands where I am looking for some action. Standing close I am starting to understand the complaint of many visitors that the drums on Mainstages were too loud during the entire weekend. While the mosh pit action started almost instantly on the first notes of ‘Explosia’, it was only with the third song ‘Backbone’ that the audience in the field really exploded. Luckily the band kept a better rhythm than the crowd who completely kicked off an otherwise big wall of death on the wrong moment. Gojira came and pounded away with a sledgehammer. Brutal. Amazing.

No rest for me after GOJIRA’s assault. With all those muscles are warmed up I plan to stretch my legs for a bit of folk dancing with the only folkmetal band at this year’s edition: ELUVEITIE. I am always amazed how the 8-piece band can pull off a decent sound every time with all those original folk instruments. The fact they play authentic instruments instead of keyboards and synths earns them credit and a highly appreciative fan base. Their new violin player Nicole Ansperger earned my blessing after this performance. The rest of this show is just a blur of dancing, moshing and too many crowd surfers falling on my head.

(Grimm Gent) Time for W.A.S.P.  and Blackie still got it! Because of the loud sound of the Mainstage it sounded way better again after we put in our ear plugs, but after that it was really pleasant. They prove that an older band with many struggles can still compete in these modern times. With a few real hits we were totally happy.

(Phoenix) I think I deserved my rest after these two intense shows and I sit down in the Metaldome for CULT OF LUNA. The tent is understandably not full as the Swedish post-metal/sludge company has to share playing time with MASTODON on the Mainstage. Their show turned out to be another highlight of the weekend. A wall of sound of dark and grueling metal sucked me in during the 50 minutes set. An amazing experience to see these guys live.

Seeing KYLESA live two times in the past I have only recently started to appreciate the geniality of this quintet. Two drummers, Laura’s haunting clean and grunts, Philip’s shouts and greasy bass lines – the perfect recipe for a musical trip. A small crowd shared my opinion, while many festival visitors chose to watch TRIVIUM or SATYRICON playing at the same time. Choices are hard sometimes at Graspop Metal Meeting…

With pain in my heart I decided to leave the festival grounds and skip on choosing between ALTER BRIDGE, NEUROSIS and THE DILLENGER ESCAPE PLAN in order to replenish some energy for the final bands. Luckily, Grimm Gent still had some energy left at that time.

(Grimm Gent) MASTODON, who once got the stamp of being the new METALLICA, have broken with that past and firmly build on their path. Despite the criticism on their latest album this band knows how to blow away the audience with a heavy sound and ramming guitars. Again a lot of atmosphere in the crowd with a lot of variety in the songs.

SATYRICON, the Norwegian blackmetal formation from Oslo, brought a rolling setlist that started off somewhat hesitantly, but quickly turned out to be quite furious. Almost all their best songs were played. Only the show aspect was missing a bit for us. But if you look at the strong songs this band delivered one shouldn’t complain. This show was grim: no more, definitely no less.

The remains of CREED and the genious voice of Myles Kennedy form a strong whole on stage. The alternation between slow and explosive songs got the approval of the audience. A lot of people were surprised they did know some songs and the average metalhead got quite the feeling for it. The show on the other hand was standard without highlights. Just play well, make a good appearance, that was  ALTER BRIDGE.

(Phoenix) The smaller Metaldome gave the opportunity for an intimate DARK TRANQUILLITY show. The Swedish pioneers of melodic death metal brought their amazing video show with them and presented the audience with a visual and auditory treat. You can expect nothing less than top quality from this band and Mikael Stanne is one of the most charismatic singers I know in the metal scene. Always sharing a genuine smile with the audience and thanking for showing up, you cannot help believing that the singer is really having fun up there. And not only up on the stage because at one point during the show he just jumped into the front rows singing the chorus of the song further while being carried on the hands of the fans. Amazing. 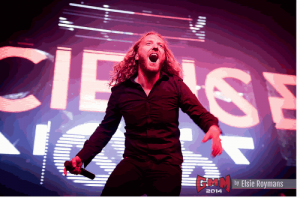 Fans of melodic deathmetal will realize how insane it is to watch two of the most influential bands in the genre straight after each other. Still recovering from DARK TRANQUILLITY I ignored LIMP BIZKIT playing their headliner set on the Mainstage and settled in the Marquee for the mighty CARCASS. As usual some sound of the Mainstage filtered into the Marquee and Bill Steer took the opportunity to bash on the pity excuse for metal that was playing over there. I refrain from slandering other metal genres, but I couldn’t agree more that I would prefer an hour and a half show of melodic death metal pioneers above the nu metal giants anytime. CARCASS’ Surgical Steel album was in my opinion on of the best (melodic) death metal albums of 2013 and the strongest comeback by far. The band was energetic and uncompromising. With IN FLAMES changing into more alternative metal it pleases me to see that these guys are still good to go for a few more years. Shows like this only raise my expectations higher for AT THE GATES’ return at the end of the year. 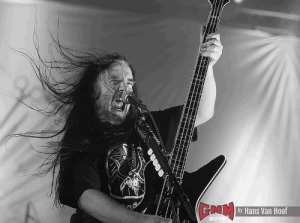 The second headliner of the night, VOLBEAT, is another band that slowly grew during its past passages on Graspop Metal Meeting. Starting out small, soon the tents could not hold the growing number of people watching the Danes. After their last appearance on the Mainstage in 2011, they now return as a full headliner act and one of the biggest European metal bands. Contrary to SABATON’s Joakim, Michael Poulsen spends less time on chatting and more on rocking out on stage. The Elvis and Cash inspired hard rock and metal appeals to a big crowd and had a lot of people partying all around. A good move by Graspop as this is a band that has truly proven being worthy of headliner status on a metal festival.

We decided to have a look at the Rammstein tribute band STAHLZEIT, but since most of us had already had the luck of witnessing the real thing we quickly decided to head over to the camping grounds and organize our own afterparty. However, if you would have the chance to check out this tribute band, certainly do so as they offer a great show reminiscent, but not quite identical, to Rammstein.

Drifting on pure euphoria of the past day’s amazing performances (and enough alcohol) we head into the night/morning playing some drinking games at the tent and end up running races when the first people start heading to the showers and wash basins in the morning. I’m still waiting for my earned victory eggs and bacon… Stay tuned for Day 3, sadly already the last! 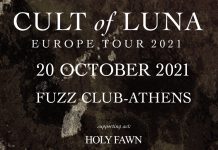