‘Mayhem In Blue’, the new album form psychedelic prog black metallers Hail Spirit Noir, is set for release on Dark Essence Records on the 14th October. The album will be the third full-length release for the Greek trio, whose debut album ‘Pneuma’ appeared in 2012, followed by 2014’s ‘Oi Magoi’.

Commenting on what fans can expect from ‘Mayhem In Blue’, the band had this to say: ‘It’s been two and a half years since the release of our last album, and with ‘Mayhem In Blue’ we have set out to express our more aggressive side, without sacrificing any of the psychedelic melodies that are an integral part of what we like to call Hail Spirit Noir’s ‘weird black sound’.  If anything, in fact, the sound is more enticing and trippy than ever.’

‘Featuring the mixing talents of Dimitris Douvras (Rotting Christ, etc.) and the exceptional mastering abilities of Alan Douches (Chelsea Wolfe, Motorhead, etc.), we feel that the result is an album that elevates our signature psychoprog black metal sound to new levels’.

Artwork for the six-track album is by Olia Pishchanska.

More information about Hail Spirit Noir can be found on the band’s Facebook page at https://www.facebook.com/Hail-Spirit-Noir-260062670728238/ 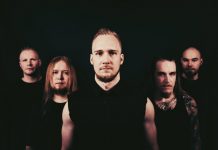