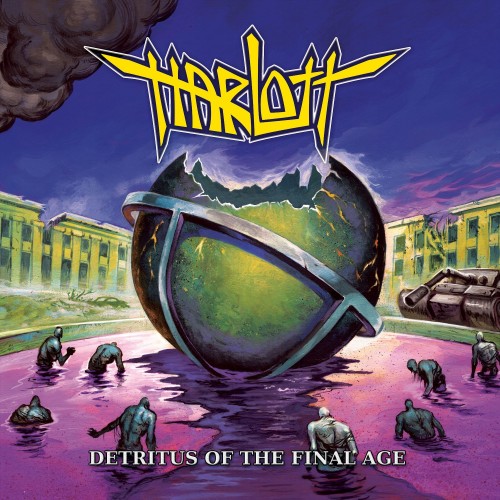 Harlott and 4arm are my favorites Thrash metal bands coming from Australia, so I was really waiting to hear their new work, entitled “Detritus of the Final Age”. As the title leaves no space for misunderstandings, once again the album deals with catastrophes and dystopia. Despite the album theme, here we have two new members for the band. Glen Trayhem on drums and Leigh Bartley on guitars. In different circumstances I would say that the newcomers brought fresh ideas and new breed in the band’s sound.

But Harlott didn’t need any change, they were sounding great and their compositions also were in top notch level. Their main goal was to keep their sound identity. They achieved that. But the compositions aren’t in their regular top level. Not that the album is bad, but this time they seem to stop evolving, as they did little by little with every new release. Their peak was “Extinction” and unfortunately in “Detritus of the Final Age”, they can’t reach their top. Yet no one will be disappointed from the new album. Andrew Hudson’s angry vocals will take you by the throat and put you in mood.

The dual guitar assault is once again top-notch delivering razor sharp riffs and even more technical parts. The record flows easily but flat until “Nemesis” and later “Miserere of the Dead” proves why Harlott is a band with plurality, always in Thrash limits. The album closes with a cover on Cannibal Corpse and the song “The Time to Kill Is Now”. Ok, the step beyond never happened here, but their name will remain hot until their upcoming album.

The Troops of Doom – The Absence Of Light EP