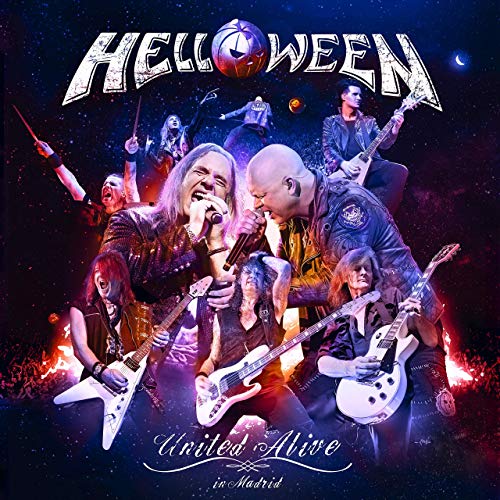 It is obvious that this reunion has created enormous expectations that the band would have to meet. It is easy to see in both the audio and visual part that the band and everyone involved with them, worked really hard on it. I was lucky enough to see them at Wacken 2018 and from that moment on I thought this particular show should reach more eyes and ears. We’re talking about something extremely professional, fantastic, great and stunning. The selection of songs is very good, covering the golden age, but also appreciating the rest of their discography. Deris and Hansen alternate but also interact, creating a plethora of emotions, while Hansen also takes over the vocals in his “Walls of Jericho” songs. 7 people on stage are honoring the past and the present, playing a 3-hour concert. Those who doubted on how god would be the condition of Kiske’s voice, because of his inactivity, I think were solemnized. As he performs extremely good at something extremely grand and imposing. When Michael Kiske left the band, his departure was accompanied by statements that he did not want to sing again Heavy Metal songs. Kai Hansen was famous for playing with Gamma Ray and Andi Deris has been widely accepted by Helloween fans over the years. Hansen’s partnership with Kiske at Unisonic was the one that lit the wick and brought “reunion” as an issue to the table. What sets this reunion apart from others is that the reunion line-up was actually a marriage of all members from the different era of the band, without leave out any member. They justly respected Deris who is a great singer, but also supported the band in his most difficult times. The tour passed through many countries and was crowned with great success, raising the status of the band. This release includes recordings from Madrid, Sao Paulo and Wacken Open Air, showing emphatically that Helloween were welcomed worldwide. Sign of our times requires that this release should be released in various editions, such as Blu Ray, CD and DVD. I would recommend an audiovisual version as the whole scenery was as wonderful as the music and the performance of Helloween. I wish they could bring this set to Greece, too. Until then, we have “United Alive” on our stereo as a replacement for it.